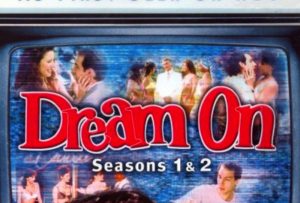 Dream On is an American adult-themed situation comedy about the family life, romantic life, and career of Martin Tupper, a divorced New York City book editor played by Brian Benben. The show distinctively interjected clips from older black and white television series to punctuate Tupper’s feelings or thoughts. It was created by Marta Kauffman and David Crane, the team who would later create the TV show Friends. It ran for six seasons on HBO between 1990 and 1996.