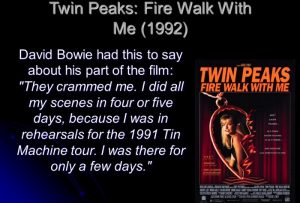 Twin Peaks: Fire Walk with Me is a 1992 American psychological horror film,[1] directed by David Lynch and written by Lynch and Robert Engels. The film can be viewed as both prologue and epilogue to the television series Twin Peaks (1990–91), created by Lynch and Mark Frost.
(5/5)

It revolves around the investigation into the murder of Teresa Banks (Pamela Gidley) and the last seven days in the life of Laura Palmer (Sheryl Lee), a popular high school student in the fictional Washington town of Twin Peaks. Additionally, the film’s narrative references and clarifies Agent Dale Cooper’s (Kyle MacLachlan) fate in the series finale. Thus, the film is often considered a prequel, however, it also has features more typical of a sequel.

Most of the television cast returned for the film, with the notable exceptions of Lara Flynn Boyle, who declined to return as Laura’s best friend Donna Hayward (she was replaced by Moira Kelly), and Sherilyn Fenn, due to scheduling conflicts. Kyle MacLachlan, who starred as Special Agent Dale Cooper in the TV series, was reluctant to return out of fear of getting typecast, so his presence in the film is smaller than originally planned.