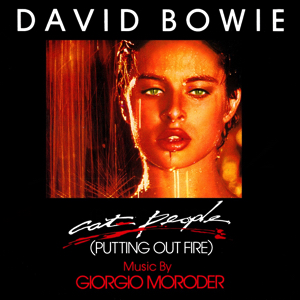 The director Paul Schrader engaged Bowie for a theme song in 1981, with Moroder having already recorded most of the music. Bowie was to put lyrics to the main theme. The B-side is a Moroder-only instrumental which featured no input from Bowie.

The song itself, in keeping with the dark tone of the film, has some slight goth rock influences, with Bowie singing in a deep baritone croon while being backed up by a female chorus, a combination that The Sisters of Mercy would commonly employ years later.

Because of Moroder’s contract, the single was issued by MCA. The full-length 6:45 version appeared on the soundtrack album, and the 12″ single, while a 4:08 edited version was made for the 7″ release. The single reached No. 26 in the UK, No. 13 in Canada[1] and No. 67 in the US – Bowie’s biggest hit there since “Golden Years”. It peaked at No. 1 in New Zealand, remaining there for three weeks, as well as in Sweden for four weeks. It was also No. 1 in Norway for seven consecutive weeks, and then returned to the top for a further week.

In December 1982, Bowie re-recorded the song for his album Let’s Dance, released the following year. This version was also released as the B-side to the title track’s single release, and performed on Bowie’s Serious Moonlight Tour. He had originally planned on using the original version of the song, but Moroder’s label MCA Records refused to license it to EMI America.

In 2009, the track was used in another film, Quentin Tarantino’s Inglourious Basterds.

Sharleen Spiteri recorded a new version of the song in 2010 which was included on her album The Movie Songbook.