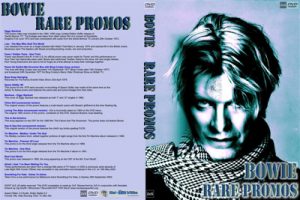 01. Ziggy Stardust live Santa Monica 1972
This promo video was included in the 1994, 1000 copy Limited Edition Griffin release of
‘Santa Monica ’72’. The footage was taken from silent colour film of a concert at Dunstable,
England 21st June 1972 and was overdubbed with audio from the Santa Monica ’72 concert
20th October 1972. Extended silent footage of the concert at Dunstable, England 21st June 1972 is contained on The 1980 Floorshow Outtakes Volume 6 DVD;

02. Lulu – The Man Who Sold The World (1974)
Lulu released this cover as a single (backed with Watch That Man) in January 1974 and reached #3 in the British charts. Musicians were The Spiders with Bowie providing backing vocals, sax and production.

03. Fame – Golden Years (Soul train 1975)
‘Fame’ was Bowie’s first #1 in the U.S. An official promo was never made for ‘Fame’ and this performance on Soul Train has historically been used. Bowie also performed ‘Golden Years’on the show, the next single release from Young Americans and said to be for Angie as a final attempt to keep their marriage together. This episode of Souk Train was aired on ABC TV (U.S.) 4th November 1975. Bowie was afforded the honour of being one of the first, if not the first, white performer to appear on Soul Train.
“He used the opportunity to promote Golden Years and his first US no.1, Fame. Somewhat awed by the occasion Bowie had been drinking [some claim he had used cocaine. ed.] to calm his nerves before the show. Interviewed before his performance, Bowie spoke thickly with disconnected sentences, probably reinforcing the strange public persona he had in the US.” [Quote taken from BowieGoldenYears]
Research suggests that the above mentioned interview does not exist on any circulated bootleg VHS or DVD.

04. Peace On Earth/Little Drummer Boy with Bing Crosby (long version).
This duet with Bing Crosby was recorded 11th September 1977 (Bing Crosby died 14th October 1977) and broadcast 24th December 1977 for Bing Crosby’s Merry Olde Christmas Show on British TV. Originally only Little Drimmer Boy was intended as a duet with Big but Bowie felt it wouldn’t allow him to highlight his vocal talents so Peace On Earth was added to the duet. There are two versions of this video, the short version starts with Bowie and Bing starting to sing, the long version featured here contains opening and closing dialogue.

05. Boys Keep Swinging (recorded for the kennet Everret Video Show 23-4-1979)
Recorded for The Kenny Everett Video Show 23rd April 1979, at the end of the song Kenny Everett as one of his characters, Angry of Mayfair, accosts Bowie on the rooftop set shouting, “What are you doing in those trousers? Stop it, whatever it is. Look at you, you lily-livered mincer. Do you know, I was in the war but I didn’t see you there. I fought for people like you…and I never got one. Look at you, I’ve a good mind to hit you with my umbrella but I think you’d enjoy it, and why should you have all the fun? So why don’t you hit me with yours? Go on, please.” Bowie then smashes his violin, unsuccessfully, and threatens Angry with the bow. Angry then says “Now, chase me round and call me names”. Bowie does so calling out “Name”. At the end Angry cries “Take me, take me”.

06. Space Oddity (promo 1980)
This promo for the 1979 semi acoustic re-recording of Space Oddity was made at the same time as the Ashes To Ashes promo and features the same sets and some footage from the Ashes To Ashes promo. It was first aired on Kenny Everett’s New Year’s Eve Show on 31st December 1979 and has seldom been seen since. It has never been released on any official VHS or DVD compilation. The audio was first released as the B-side of the Alabama Song single in 1980 and later appeared as a bonus track on Ryko’s re-release of Scary Monsters in 1992 credited as “Re-recorded single B-side, 1979”

07. Bauhaus – Ziggy Stardust (1982)
This cover of Ziggy Stardust was released as both 7″ and 12″ singles in 1982. It also appeared on a bonus 12″ that accompanied the Canadian LP release of Bauhaus’ 1982 album ‘The Sky’s Gone Out’ and later as a bonus track on the UK and Canadian CD releases of the album.

08. China Girl (uncensored version 1983)
The original version of this promo, contained on this DVD, features a nude beach scene with Bowie’s girlfriend at the time Geeling Ng. When released in 1983 most TV stations took exception to this explicit content and the promo was re-edited to remove it. In all official VHS and DVD compilations of Bowie promos, 1993’s ‘Bowie: The Video Collection’, 2002’s ‘Best Of Bowie’ and, more recently, 2007’s ‘The Best Of Bowie 1980/1987 Sight & Sound Edition’, the censored version has been used. The only official source of this uncensored version is 1983’s long out-of-print ‘David Bowie; Video EP’, also released under the name ‘David Bowie; Video 45’ which featured the promos for the Let’s Dance singles, Let’s Dance, China Girl and Modern Love. This uncensored version won an MTV award.

09. Loving Alien (uncensored version 1985) – this is incorrectly dated as 1984 on the DVD menu.
The original 1985 version of this promo, contained on this DVD, features Bowie’s nose bleeding. As with the China Girl promo, when released in 1985 most TV stations took exception to this explicit content and the promo was re-edited to remove it. The long out-of-print 1993 VHS ‘Bowie: The Video Collection’ features the uncensored version but in all official DVD compilations of Bowie promos since then, 2002’s ‘Best Of Bowie’ and, more recently, 2007’s ‘The Best Of Bowie 1980/1987 Sight & Sound Edition’, the censored version has been used.

11. Day In Day Out (uncersored version 1987)
The original version of this promo, contained on this DVD and sometimes referred to as the ‘fuck’ version, features the child’s toy bricks spelling FUCK. As with the China Girl and Loving The Alien promos, when released in 1987 most TV stations took exception to this explicit content and the promo was re-edited to remove it. In all official VHS and DVD compilations of Bowie promos, 1993’s VHS ‘Bowie: The Video Collection’, 2002’s ‘Best Of Bowie’ and, more recently, 2007’s ‘The Best Of Bowie 1980/1987 Sight & Sound Edition’,
the censored version has been used. The only official source of this version is 1987’s long out-of-print ‘Day-In Day-Out Video 45’ – thanks to screen54 for providing this.

12. Tin Machine – medley / Under The God (1989)
The Medley contains short, edited together portions of eight songs from the first Tin Machine album released in 1989, quite likely as an Electronic Press Kit, and was filmed at the Ritz in New York by Julien Temple. It runs for approximately 9 minutes (12 minutes with ‘Under The God’ included) and features ‘Pretty Thing’, ‘Tin Machine’, ‘Prisoner Of Love’, ‘Crack City’, ‘Bus Stop’, ‘Video Crime’, ‘I Can’t Read’ [note that this contains the modified lyric version which states “I can’t reach it anymore” in place of the original lyric “I can’t read shit anymore”] and ‘Working Class Hero’ and then runs into the full promo for ‘Under The God’.

15. Real Cool World (1992)
This promo was released in 1992, the song appearing on the OST of the film ‘Cool World’. The OST is called ‘Songs From The Cool World’. Bowie is not featured in the promo. 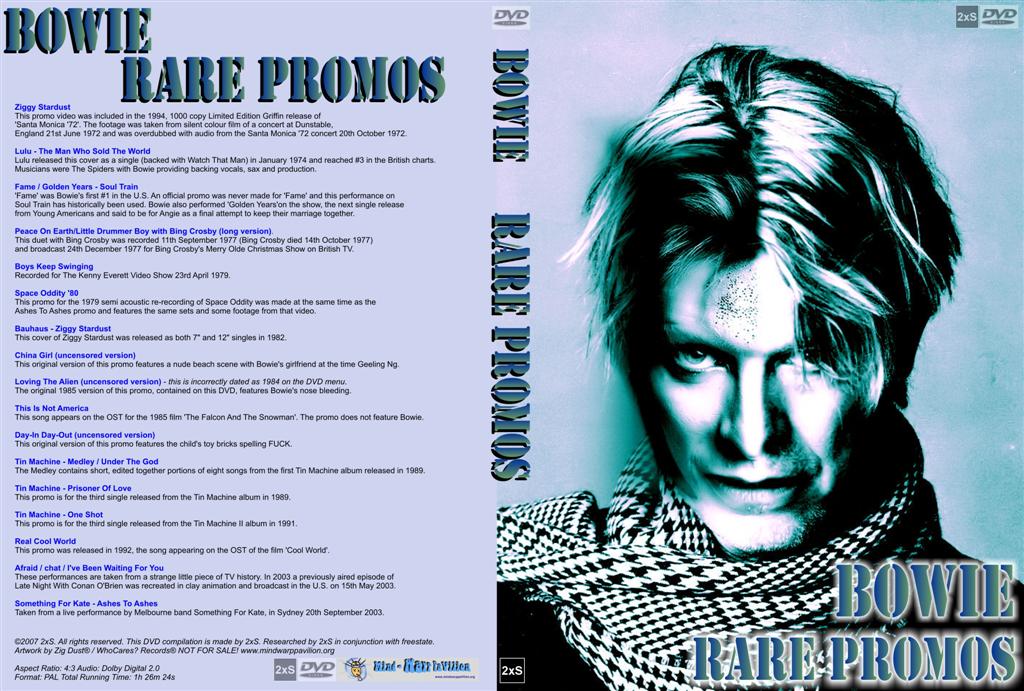