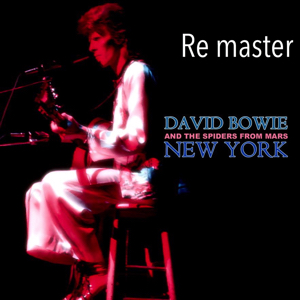 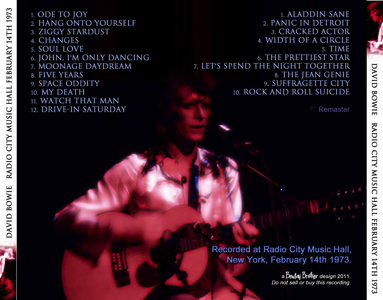 The Concert Tapes:
This is the famous concert in which Bowiee descended on the stage in a cage hanging 17 meters above the stage. A spectacu­lar opening of this concert which was given on Valentine’s Day and was also the first concert of the short US Tour II. It was a full house. The group Fumble was to do the first part of the programme,but for some reason it was cancelled.

“They can’t see,sit down!” some one cries out after Hang on to Yourself. After Ziggy Stardust Bowie says: “It’s nice to come down to New York again”.
Although the band was reinforced with additional saxophone players,Bowie did the sax solo in Soul Love himself. This tape and that of the second evening in NY are the only 1973 tapes which include this number.

After My Death a screen was raised at the back of the stage displaying a cartoon in which the cosmos seems to bear down upon the spectators at the speed of light.

This is a very long concert by the way: no fewer than 21 numbers,including all numbers but one of the entire LP Aladdin Sane which at the time had not yet appeared. After Watch That Man Bowie says: “In case you’d like to know,we’ve made a new album,that was the first,it’s called Watch That Man. As you might know,we brought some new people with us tonight,a very quick one is Ken Fordham who’s very quick but a little bit tired,Geoffrey and Hutch and you may know Mike Garson from my last tour. This is a track from the new album anyway,this one is called Drive in Saturday which was written between Phoenix and Seattle”.
The audience respond well to the new numbers but when Crac­ked Actor is over no one applauds,probably because the audien­ce are not sure whether it is really over or may yet go on. “That was called Cracked Actor“ Bowie says,and then the audi­ence starts applauding.
Bowie announces Width of a Circle and the long guitar solo in the number he used to change costume again,which that night he did as many as seven times! After the number Bowie introdu­ces the band,but not the additional musicians whom he had al­ ready introduced to the audience.
From Jean Genie onward the tape is considerably inferior(SQ 6!). During Rock & Roll Suicide something happened of which a good description can be found in Stephen Davis’ review of this concert in the Rolling Stone of 29-3-1973:

“During Suffragette City Bowie’s maraca broke and a piece of it lodged in his eye,which he was rubbing as the band left the stage. The crowd demanded more and was kept waiting five ~as restored. He came back on in six-inch stacked heels for a beltin& torchy Rock & Roll Suicide. Bowie played the edge of the stage,inciting the droolers to lurch at him. One man actually ~ade it and,grabbing Bowie in a hug,planted a big wet kiss on his desiccated cheeks.
The man was hurled back into the mealstrom in front of the stage and Bowie re­ sponded to the assault by crumpling like a pansy in a monsoon,a fainting heroine in an old French play – Ca­ mille – “Ah,mon amour, j’etouffe!”. With the star recumbent and unconscious on the floor, the house lights went off and he was carried off. When the house lights came on,the stage was empty. Rock & roll sui­cide and the kiss of death”.

The immense tension to which he had been exposed during the preparations of the tour had made too high demands upon his system which was the reason of his fainting. He immediately went to sleep and slept for no less than twelve hours!

Obviously a rather excep­ tional tape,but it’s a pity that Bowie’s voice sounds rather far off. Of the pis­tol cracks which are suppo­sed to be heard on this tape there is not a trace. One does hear all sorts of grum­bling sounds and the audien­ce cry “No,I can’t believe this,no!”.

Bowie, in a mere four months, had become a STAR! The show was sold out! The buzz was deafening!

Playing Radio City, Bowie was clearly prepared and determined to take advantage of every stage gimmick the venerable venue had at its disposal. Hydraulic stage risers, smoke machines, scrims, absolutely incredible lights, an augmented band of at least 7, foxy female techs, 5 or 6 costume changes… And what costumes, fashion-forward into the next century! Something “Oooo, ahhhh!” cool was happening during almost every song. And Bowie himself was much further out… bigger redder hair, blatantly obvious make up, almost anorexic-thin, and utterly androgynous (we all loved the fact that, in an age when virtually any gay celebrity was still in the closet, David Bowie was a straight guy pretending to be gay).

The show ended with Bowie suddenly and shockingly collapsing toward the end of the encore, [Rock ‘n’ Roll Suicide] just as he got to the line “Give me your hands…”. A bodyguard, dressed all in black rushed out of the wings and picked Bowie up like a limp broken doll and carrying him off stage with the lights going black… What the… Did he faint? Had he been shot?! The audience’s reaction was in disarray. A minute later, I realized I’d just witnessed one of the great Rock’n’Roll exits of all time.”