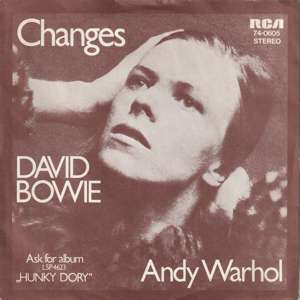 “Changes” is originally released on his 1971 album Hunky Dory. RCA Records then released it as a single from the album on 7 January 1972. Written following his promotional tour of America in early 1971, “Changes” was recorded at Trident Studios in London between June and July that year. Co-produced by Bowie and Ken Scott, it featured Strawbs member Rick Wakeman on piano and the musicians who would later become known as the Spiders from Mars: guitarist Mick Ronson, bassist Trevor Bolder and drummer Mick Woodmansey. The song also marks the first instance of Bowie playing the saxophone on one of his recordings.

At this point in his career, Bowie had experimented with numerous musical styles, all of which failed to earn him stardom. The lyrics of “Changes” reflect this, with the first verse focusing on the compulsive nature of artistic reinvention and distancing oneself from the rock mainstream. The second verse concerns clashes between children and their parents, urging them to allow their children to be themselves as teenagers, a topic Bowie had spoken out about before. Musically, “Changes” is an art pop song that features a distinctive piano riff. Upon release as a single, “Changes” flopped like its parent album. It wasn’t until the success of its follow-up The Rise and Fall of Ziggy Stardust and the Spiders from Mars that the song garnered success. RCA later chose it as a B-side for the reissue of “Space Oddity” in 1975, which became Bowie’s first UK number-one single.

Retrospectively, “Changes” is regarded as one of Bowie’s best songs, with many praising Bowie’s vocal performance and Wakeman’s piano playing. It has also appeared on several best-of lists. His biographers have viewed the track as a manifesto of his entire career, predicting a constant change of musical styles. Bowie performed “Changes” frequently during his concert tours; it was the final song he performed on stage before his death in 2016. The song has appeared on numerous compilation albums and is the namesake of several. Several artists have covered the song, including Australian singer Butterfly Boucher for the 2004 film Shrek 2, whose version featured new vocals from Bowie.