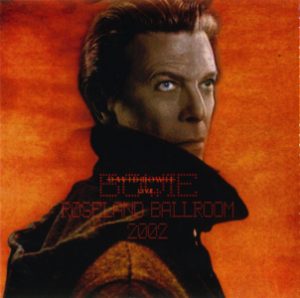 Concert for Bowie members only

David Bowie, 21st-Century Entrepreneur
by John Pareles 9 june ,2002 for the New York Times
IN a Manhattan rehearsal studio, Gerry Leonard seemed to be noodling on his guitar as the rest of David Bowie’s band waited. He played some sustained notes and a bit of minor-key arpeggio; he worked his effects pedals, adding echoes. A digital stutter entered the pattern, and suddenly the music gelled into ”Sunday,” the song that opens Mr. Bowie’s new album, “Heathen,” which will be released on Tuesday.

Mr. Bowie sang somberly about searching for signs of life, about fear and hope. At the end of the song, he shivered like someone coming out of a trance. “Ahhh,”he said and grinned. “Good morning!” It was just after 11 a.m. and Mr. Bowie, 55, had already worked out at the gym and given an extended interview before starting the day’s rehearsal for his summer tour.

Lean and affable, he was wearing a skintight gray T-shirt and stylishly understated gray pants. His gaze, with different-colored eyes because of a childhood accident that paralyzed his left pupil, has grown less disconcerting; he laughs easily. When asked what he considered the central point of his work, he said, ”I write about misery” and chuckled.

Visions of cataclysm and professional aplomb: that’s Mr. Bowie’s life in his fourth decade as a rock star. One of rock’s most astute conceptualists since the 1960’s, he has toyed with the possibilities of his star persona, turned concerts into theater and fashion spectacles, and periodically recharged his songs with punk, electronics and dance rhythms. Now he has emerged as one of rock’s smartest entrepreneurs.

“Heathen” is the first album from Mr. Bowie’s own recording company, Iso, which has major-label distribution through Sony. In 1997, he sold $55 million of Bowie Bonds backed by his song royalties; the next year, he founded the technology company Ultrastar and his own Internet service provider-cum-fan club, Bowienet (davidbowie.com). In a nod to his art-school background, his bowieart.com sells promising students’ work without the high commissions of terrestrial galleries.

His deal with Sony is a short-term one while he gets his label started and watches the Internet’s effect on careers. “I don’t even know why I would want to be on a label in a few years, because I don’t think it’s going to work by labels and by distribution systems in the same way,” he said. “The absolute transformation of everything that we ever thought about music will take place within 10 years, and nothing is going to be able to stop it. I see absolutely no point in pretending that it’s not going to happen. I’m fully confident that copyright, for instance, will no longer exist in 10 years, and authorship and intellectual property is in for such a bashing.”

“Music itself is going to become like running water or electricity,” he added. “So it’s like, just take advantage of these last few years because none of this is ever going to happen again. You’d better be prepared for doing a lot of touring because that’s really the only unique situation that’s going to be left. It’s terribly exciting. But on the other hand it doesn’t matter if you think it’s exciting or not; it’s what’s going to happen.”

With his wife, Iman, he has a 22-month-old daughter, Alexandria, for whom he’s keeping to a minimum his time away from home in Manhattan. When Mr. Bowie signed on as a headliner for Moby’s Area:Two tour this summer, he made sure the schedule allowed him to return home between each of the six East Coast dates. He is also organizing, and performing at, Meltdown, a contemporary music, film and visual arts festival in London. (One songwriter he booked is Norman Carl Odam, known as the Legendary Stardust Cowboy, from whom he took Ziggy Stardust’s last name in the 1970’s; on “Heathen,” he sings the Cowboy’s “Gemini Spacecraft,” about an astronaut obsessed with a girl he left behind.)

HIS fans among musicians, including Moby and Nine Inch Nails, have toured with Mr. Bowie, introducing him to a younger generation.

Back in 1990, Mr. Bowie tried to jettison his past. He billed an arena tour as the last time he would play his old hits. “I really did think I meant that,” he said. “I got quite a way into the 90’s before I started thinking, ‘Well, if you want an audience, David, you may want to consider putting some songs into your sets that they’ve actually heard.’ Yes, I know, I went back on my word completely and absolutely.”

He’s now more comfortable riffling through his huge body of work. This week, the Museum of Television and Radio, in New York and Los Angeles, opened “Sound + Vision,” a retrospective of Mr. Bowie on video that continues through Sept. 15. A restored version of “Ziggy Stardust and the Spiders From Mars,” the D. A. Pennebaker documentary of the 1972 tour that defined glam-rock, will be released on July 10.

“Heathen” was produced by Tony Visconti, who last collaborated with Mr. Bowie on his 1980 album, “Scary Monsters.” He worked on most of Mr. Bowie’s 1970’s albums, including the celebrated Berlin trilogy of “Low,” ” ‘Heroes’ ” and “Lodger,” on which Mr. Bowie and Brian Eno greeted the punk upheaval with their own merger of the experimental and the visceral.

On “Heathen,” Mr. Bowie knowingly hints at his past. He echoes the song ” ‘Heroes’ ” in “Slow Burn,” which wonders, “Who are we in times such as these?” He revives analog keyboard sounds like that of the Stylophone, a miniature electric organ played with a stylus that was heard on ”Space Oddity” in 1969 and reappears in the new “Slip Away.” When Mr. Bowie starts his tour with a show for fan-club members at Roseland on Tuesday, he plans to play all 12 songs on “Heathen,” followed by all of “Low.” Hearing the music 25 years later “makes the hairs on my arm stand up,: he said.

To make “Low,” Mr. Bowie recalled: “I had brought the idea of having fundamentally an R & B rhythm section working against this new zeitgeist of electronic ambience that was happening in Germany. It was terribly exciting to know that one had stumbled across something which was truly innovative.

“At that time, I was vacillating badly between euphoria and incredible depression. Berlin was at that time not the most beautiful city of the world, and my mental condition certainly matched it. I was abusing myself so badly. My subtext to the whole thing is that I’m so desperately unhappy, but I’ve got to pull through because I can’t keep living like this. There’s actually a real optimism about the music. In its poignancy there is, shining through under there somewhere, the feeling that it will be all right.”

Drug problems are long behind him, Mr. Bowie said. He now hesitates to take even an Advil because. “I have such an addictive personality,” he said.

Making “Heathen,” he and Mr. Visconti were leery of nostalgia. ”One thing we haven’t tried to be is cutting edge,” Mr. Bowie said. “The other thing we’ve tried not to do is to delve too far into the past and rely on our known strengths, our known previous work. We do know, between us, how to landscape a song and give it a real place, an identity and a character. I guess that’s the vestiges of the more theatrical things.”

The album starts with “Sunday” and ends with its title song, both hushed and haunted by mortality. In “Heathen,” Mr. Bowie sings, “Still on the skyline, sky made of glass/ Made for a real world, all things must pass.” The album was written before Sept. 11, however, and the songs join a long line of Mr. Bowie’s apocalyptic scenarios.

“I hope that a writer does have these antennae that pick up on low-level anxiety and all those Don DeLillo resonances within our culture,” he said. ”But I don’t want to say that it was in any way trying to suggest that it was going to happen. It’s not like it’s something new to me. These are all personal crises, I’m sure, that I manifest in a song format and project into physical situations. You make little stories up about how you feel. It’s as simple as that.”

Between his own ruminations, he borrows “Gemini Spacecraft,” the Pixies’ “” and Neil Young’s “I’ve Been Waiting for You”; in songs like “Afraid” and “I Would Be Your Slave,” he sings about love, insecurity and transience.

“I tried to make a checklist of what exactly the album is about and abandonment was in there, isolation,” he said. “And I thought, well, nothing’s changed much. At 55, I don’t really think it’s going to change very much. As you get older, the questions come down to about two or three. How long? And what do I do with the time I’ve got left?

‘When it’s taken that nakedly, these are my subjects. And it’s like, well, how many times can you do this? And I tell myself, actually, over and over again. The problem would be if I was too self-confident and actually came up with resolutions for these questions. But I think they’re such huge unanswerable questions that it’s just me posing them, again and again.”