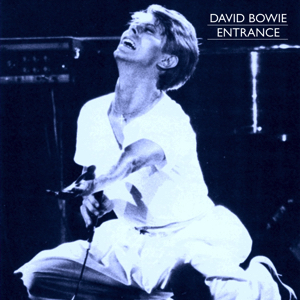 The house lights were still on when David Bowie walked onto the stage. He wore a cream suit, introduces himself and says “Hi, I’m David Bowie” And then the magic started!

The show itself is a good performance all around, Bowie remembers just about all the lyrics (good for Rock N Roll Suicide). The taping crew is funny, belching into the mike during Be My Wife, and again weighing in during the band intros “appearing soon, the Gordon Stewart space band…..” maybe Gordon was one of the tapers, who knows. I also like the opening night delays between songs, noticeable during the intro to Blackout and the Jean Genie, where Bowie says “Good Evening” before launching into Jean Genie, something he didn’t do in other shows. On my copy there are a few nicks here and there, but nothing bad, Soul Love is missing about 30 seconds in the middle of the song which was probably a source tape cut/flip, Five Years suffers from some pretty decent warble, and Beauty and the Beast is shortened, as is Station to Station. I think these are just short versions not cuts. So try to bear with the quality and enjoy this show for what it is, until something better hopefully comes along. I am still hopeful that someday an upgrade may show up, or the Fresno show from April 2, or even a better copy of the Forum show from April 6th. These early tour shows are always unique and a fun listen. This Rock N Roll Suicide is very nice. As always from the Blackout archives.

Volume reshaping on The Jean Genie, where volume drops from half way on the source tape.
Tape flip between The Jean Genie and Blackout – crowd noise, reasonably clean
Join between Breaking Glass and Beauty And The Beast. Crowd noise only, but not sure if the final “I never touch you” after the false ending is missing.