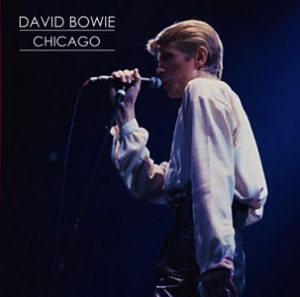 Label: No label
Audio Source: audience
Lineage:
Total running time: 1:38:55
Sound Quality : Much noise ,dull ,but still good listened to
Attendance: 4.500
Artwork: by steve23ey ? > back side Covers Not Yet Available , who can help me with this .?
Note 1: The track no. 7, Sense Of Doubt, was not listed in the original post but it is only a fragment (53 seconds long).
Note 2: Sound of first half different from 2nd half (1st half with lower frequencies, 2nd half slightly overmodulated and hissy)

Bowie comes on stage for the second part of the show and Say’s: “Per­fectly honest,I’m having a lot of trouhle seeing you. I want some uhm … is the houseligh man here? Could you put the houselights on a little bit … a bit more … a bit more … ah, that’s better. Hello!”. During Five Years someone from the audience threw a red shirt onto the stage. It landed right on the edge,so Bowie had to come to die very front to take a look at it. He went down on hands and knees to scrutinize it,then got up,but returned to have another look at it! Bowie sounds quite happy and cracks a joke or two. He liked this hall; well,he would,since it is a small theatre with a capacity of 4,500 seats,a great contrast with the enormous arenas where he did most of the concerts of this Lour. He played in this hall for two nights,although he could easily have given one concert in an arena for 10,000 people.
[sliderpro id=”12″]

The original recording had the following flaws:

– sound of first half different from 2nd half (1st half with lower frequencies, 2nd half slightly overmodulated and hissy)

– some gaps between songs
– some cuts in songs, sometimes with new start from the same position
– track starts at wrong positions
– varying sound levels

These corrections were made:

The track no. 7, Sense Of Doubt, was not listed in the original post but it is only a fragment (53 seconds long).

I was in discussion with bofinken57 about this recording as he uploaded the show from 17th of April in Chicago.
He mentioned that it could be fake which means it would be put together from other 78 shows (as discussed in other Bowie forums).
I think that the recording is genuine because:

– it is different from all other recordings from 78 I have but it’s definitely not the one from the 17th
– there are many similarities to the recording from the 17th: same song sequence and number of songs, almost similar track length
– even if the sound is slightly different at the 2nd half it seems to be unique (for instance the taper or others around him are talking and shouting from time to time).

But please feel free to correct me.

Despite of all flaws and after the made corrections this is still a very listenable show and it is amongst the better ones of that tour.