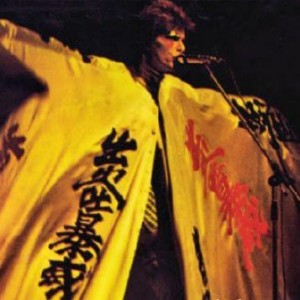 A nice tape
It does give a good impression of Bowie’s suc­ces in Japan.
Ronson plays the intro to Rock & Roll Suicide and Bowie introduces the entire band: “On tenor sax Brian. On bariton sax Ken Fordham. On vocals Jeff,on rhythm guitar Hutch, on piano Mike Garson. On drums Woody Woodmansey,on bass Trevor Bolder. On lead guitar Mick Ronson … time takes a cigarette ….” Bowie alters the lyrics somewhat: “Oh,give me your love,’cause you’re wonderful,oh give me your hands ….” The audience are frantic and after Rock & Roll Suicide they give him another recall. “We thank you very much,you’re a wonderful audience and we love you very much indeed,thank you” Bowie says grate­fully when reappearing on stage. Then he gives a fine version of Round & Round.

In Japan Bowie took to performing part of his stage show dressed only in a red sequined jockstrap – which he explained was in the tradition of Japanese sumo wrestlers and probably also a necessity due the physical exertion of his increased theatrical performance:

“In Japan we were faced with an audience that we presumed didn’t understand a word of what I was saying. Therefore I was more physically active than on any other tour I’ve ever done. Literally I activated the whole thing with my hands and body. I needn’t have sung half the time.” – Bowie