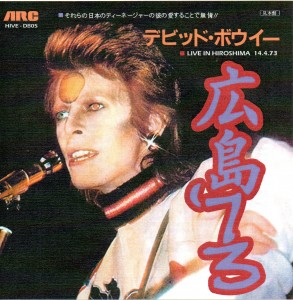 This is the fifth concert of this full sold-out Japanese tour.
Mostly Bowie was greeted hysterically in Japan,but,alas,there is not much to be heard of the audience on this tape.
“This song is for you,it’s called Starman“ is greeted with franzy,as well as Jean Genie.

Disc 5 was recorded at Yuubinchokin Kaikan in Hiroshima on 14th April 1973. the Hiroshima gig has always been the most widely-circulated, not least because for a long time, it was the best quality of the recordings. So it’s hard to understand why Hive have incorporated such a lousy recording here! It’s hissy and with diginoise.