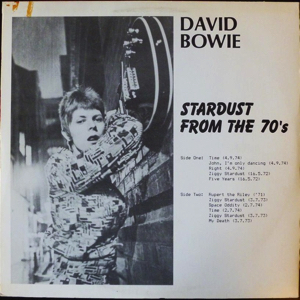 This admittedly not very lovingly made sampler has nevertheless some rare stuff which I have not seen elsewhere.
Unfortunately some of the tracks are only fragments which are faded in or out.
At the time I bought it (somewhere in the mid 80’s) I was not aware of possible rarities on it and so I was rather frustrated when I played it on my turntable.

Starting with 3 tracks from the LA concert which preceeded the famous gig from 5.9.74 these tracks do not appear on the well known recordings from that day.
Right is only a fragment (0:37 min.) and it sounds rather as coming from a soundcheck.
Time is faded out and at the end there is a strange conversation snippet like coming from a radio ad.
John, I’m Only Dancing is faded in and only takes 1:33 min. The sound of these tracks is quite good.

The next 2 tracks are from the BBC sessions

Side B starts with Rupert The Riley and there are certainly better sounding versions of that.
Then there are really some “Oddities” apart from Space Oddity and Time coming from the Tampa 2.7.74 concert.
It starts with a fragment of Ziggy Stardust from the last Ziggy concert at Hammersmith. The song is faded in and out again.
Later on B-side there is another fragment of this song, faded in again and played until the end.
The last song of the bootleg is My Death also coming from the Hammersmith show. Again the song is faded in but at least is represented with 2:51 min. until the end of the song.
Now the “oddity” is that these Hammersmith tracks are coming neither from the now well knkown sbd nor from the His Master’s Voice bootleg nor from the official release. Nevertheless the sound is very good. I would suppose that these tracks are either coming from the rumoured audience recording or from one of the radio broadcasts which then still included these 2 songs. 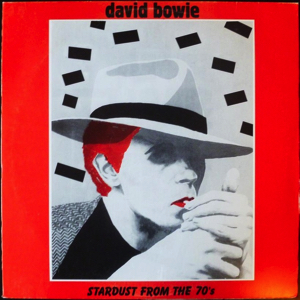