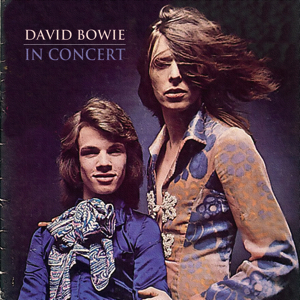 BBC Pick Of The Pops
In Concert @ the Paris Theatre, London
5th June 1971

Sound Quality: Equals record or radio apart from a slight noise and some dullness. 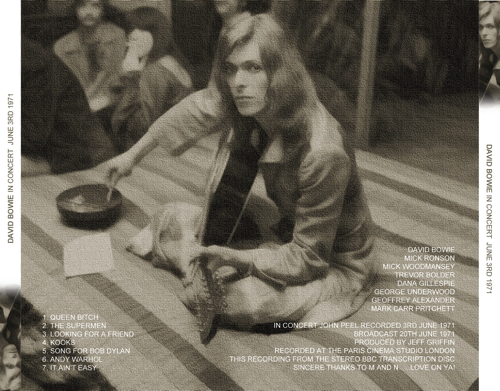 ‘Oh! You Pretty Things’ was not broadcast, and “does not remain on archive” according to the notes of Bowie At The Beeb. This show has a long bootleg history: nearly the entire transmission (only small parts of John Peel’s introductions are missing) was released already in 1978 on Ziggy 2 (Dragonfly Tune In 002). Queen Bitch/The Supermen/Looking For A Friend/Kooks/Song For Bob Dylan/It Ain’t Easy were released on a BBC transcription disc called Pick Of The Pops For Your DJó349 (128511-S), while the “Bowie At The Beeb” broadcast re-aired ‘Bombers’, ‘Looking For A Friend’, ‘Almost Grown’ and ‘Kooks’. The complete show (minus ‘Oh! You Pretty Things’), taken from the NMC set, appeared on Kiss The Viper’s Fang (EDB 002).

Identifiers: although some of the songs were repeated in other BBC sessions (e.g. ‘The Supermen’, ‘Queen Bitch’), this was a live set and all the tracks can be identified by the audience politely clapping after each song, or by the guest singers.