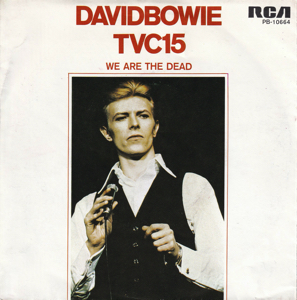 “TVC 15” is a song written and recorded by singer-songwriter David Bowie and released on his 1976 album Station to Station.

The track was inspired by an episode in which Iggy Pop, during a drug-fueled period at Bowie’s LA home, hallucinated and believed the television set was swallowing his girlfriend. Bowie developed a story of a holographic television, TVC 15. In the song, the narrator’s girlfriend crawls into the television and afterwards, the narrator desires to crawl in himself to find her.

On 15 December 1979, Bowie recorded the song for a performance as a musical guest on Saturday Night Live, accompanied by Klaus Nomi and Joey Arias.

Bowie performed the song during the Live Aid concerts on 13 July 1985. The tempo was considerably faster and more upbeat.