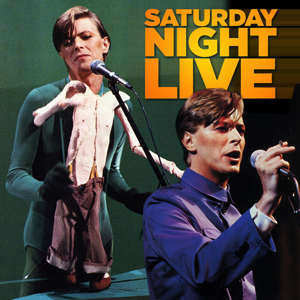 Forty years ago today a whole new persuasion of young Americans awoke having been converted by David Bowie’s appearance on Saturday Night Live the previous evening.

For it was on 15th December 1979 that this live broadcast in New York had a similarly persuasive effect on a receptive group of US youngsters that Starman on TOTPs in 1972 and the BBC’s 1975 Cracked Actor documentary had on UK teenagers.

Of course, the youth of America looking for something new had already had their hearts and minds captured by broadcasts of both The 1980 Floor Show and The Ziggy Stardust Motion Picture more than half a decade earlier, but the SNL appearance helped to cast the net further.

For The Man Who Sold The World Bowie was lifted and positioned in front of the microphone by Klaus and Joey in a costume designed by Mark Ravitz and Bowie, inspired by Sonia Delaunay’s designs for Tristan Tzara’s 1923 play Le Cœur à gaz (The Gas Heart).

The skirt suit that David is wearing on the right of our montage was designed by Brooks Van Horn costume house, New York, and was worn for TVC 15, the song that also showcased aforementioned pink poodle.

The other picture shows DB operating a puppet while utilising green-screen technology for Boys Keep Swinging to hilarious effect.

In an absurd move the show’s producers blanked the line “Other boys check you out” but seemingly missed the puppet’s obvious excitement at the climax of the song.

Words cannot do Bowie’s SNL appearance justice, suffice to say, it remains among the most surreal television performances broadcast anywhere, ever.