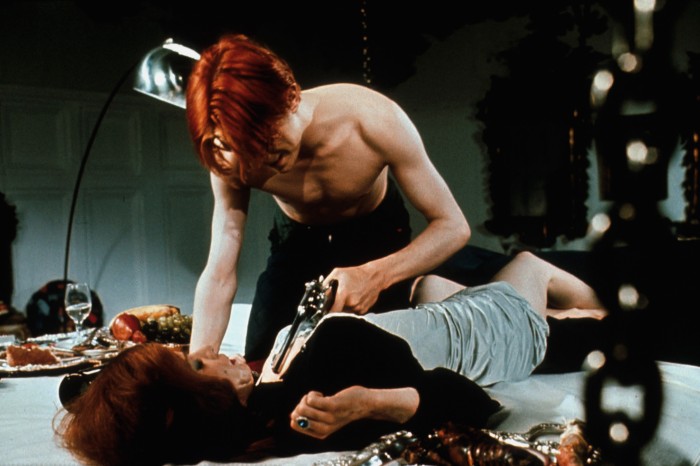 The Unofficial Bowie – A Conversation Piece 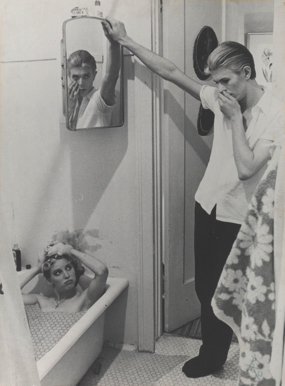 For several years now, Chris O’Leary’s Pushing Ahead of the Dame blog has been one of the Greatest Things On The Internet, with O’Leary guiding readers through the endless twists and turns of David Bowie’s fascinating career, song by song. Last month, Zero Books published Rebel Rebel, the first volume of this gargantuan project, covering 1964-1976, and featuring revised/expanded/improved entries. Needless to say it’s an essential addition to your bookshelf.

As a teaser, we asked O’Leary to round up some of the best and most interesting Bowie oddities yet to be officially released. Here’s what he came up with. . .

The “unreleased” David Bowie is a thin field, comparatively speaking. For one thing, there are no circulating recordings (audio or visual) of Bowie performing in the 1960s, barring a clip of him lip-syncing “Space Oddity” on a German TV show in 1969. The rest of his ‘60s television appearances were wiped or possibly misfiled (there’s a long-standing rumor that various Dutch and German TV appearances exist and will resurface one day). Although he and his bands regularly played venues like the Marquee Club in London, there are no tapes of these performances, at least circulating. And there are only a relative handful of demos, alternate mixes and outtakes from Bowie’s various albums.

Why? Well, part of it’s because Bowie was a commercial nonentity for much of the ’60s, so if you were an enterprising bootlegger with a reel of tape, you’d probably record the Stones or the Small Faces or Pink Floyd, not the opening act, “Davy Jones and the Lower Third.” And Bowie’s kept a firm grip on his recordings, especially those cut after 1976. He owns most of his masters and session tapes (allegedly), so there’s been nothing remotely equivalent to the “Unsurpassed Masters” series of Beatles studio outtakes or the ever-expanding Dylan outtake archive.

This situation shows no sign of changing. While in the 1990s, Bowie let Ryko include some outtakes on their CD issues of his back catalog (a list here), he’s shown little interest of late in repackaging his old records with “new” demos and alternate takes.

That said, there are still a lot of things to look for:

The Bowie/Hutchinson tape: Recorded in spring 1969, this demo tape was cut by Bowie and his then-partner John Hutchinson, who were looking for a deal with the likes of Atlantic and Philips/Mercury, the latter of whom signed Bowie as a solo artist. A few songs from the tape have been issued as CD extras—demos of “Space Oddity” and “An Occasional Dream”—but most of the tape’s still unreleased. Notable for “Lover to the Dawn,” the ancestor of Bowie’s “Cygnet Committee,” a wonderfully fragile-sounding demo of “Letter to Hermione” and covers of Lesley Duncan’s “Love Song” and Roger Bunn’s “Life Is a Circus.” Originally issued as the 1980s bootleg The Beckenham Oddity, a heap of subsequent versions exist.

The Complete BBC Sessions: Bowie at the Beeb did a fine job of compiling the most essential of Bowie’s recordings for the BBC, cut between 1967-1972, but a number of songs from these sessions remain unreleased.<div class=”player-unavailable”><h1 class=”message”>Er is een fout opgetreden.</h1><div class=”submessage”>Javascript kan niet worden uitgevoerd.</h1></div>

Bowie: Songwriter: This is the largest trove of unofficial Bowie out there—the songs he recorded, mainly at his publisher’s office ca. 1967-1972, that his manager and publisher distributed as prospective covers. These range from songs for Bowie’s proposed 1968 album on Deram (which he never recorded) like “April’s Tooth of Gold,” “Silver Treetop School For Boys” and “Social Kind of Girl,” to demos of songs like “Changes”.

There are some wonderful oddities intended for other singers, like the “cabaret” vamp “Miss Peculiar” (rejected by Tom Jones), “Right on Mother” (recorded, with little success, by Peter Noone) and my favorite, “Rupert the Riley,” an ode to Bowie’s vintage cars and sung by Mickey King, a minor figure in the Bowie circle at the time.

The Friars Club, Aylesbury, September 25, 1971: One of the earliest complete Bowie solo sets circulating, including his performance of Biff Rose’s “Buzz the Fuzz.” Released as Aylesbury 71 and Close To The Golden Dawn, it’s up on YT at the moment.

Ziggy Stardust Tour: The essential show, Santa Monica (October 1972), was officially released some time ago, but other shows from the Ziggy Stardust era are worth hearing—like the Kingston Polytechnic concert, which has Bowie covers of James Brown and Cream and Ziggy Stardust’s debutante ball at London’s Rainbow Theatre in August 1972. Here’s “Starman”.<div class=”player-unavailable”><h1 class=”message”>Er is een fout opgetreden.</h1><div class=”submessage”>Javascript kan niet worden uitgevoerd.</h1></div>

The 1980 Floor Show: Aired on The Midnight Special in 1973 and still never officially released, though the broadcast and various outtakes have been on YouTube for ages. A weird, squalid-looking performance, it’s the last gasp of Ziggy Stardust and the only public appearance of Bowie’s ill-fated “soul” trio, the Astronettes. Ends with Bowie and Marianne Faithfull’s version of “I Got You Babe,” which is genius.

The 1974 Tour: The studio-doctored David Live from Philadelphia is the official “Diamond Dogs” tour document, but go for the superior Los Angeles show from September ’74: A Portrait In Flesh.

The Young Americans tapes: Drexel University has three reels (one actual reel, the others digital copies) from the first days of the Young Americans sessions at Sigma Sound Studios, including several takes of the title track and the outtake “It’s Gonna Be Me,” a complete take of the unreleased “Shilling the Rubes” and a Professor Longhair-esque version of Bowie’s “I Am a Laser.” (Much more in my book, if this sort of thing interests you.) A few snippets, collected on “The Gouster Sessions,” are on YouTube.

The 1976 Tour: The killer Nassau Coliseum show is on a recent Station to Station reissue, but there are plenty of other sets that don’t axe Dennis Davis’ drum solo on “Panic In Detroit,” as the official release did. Video footage of tour rehearsals in Vancouver, February 1976, can be found here.

Musikladen Extra, 1978: Stage (like David Live, a Philadelphia concert recording) is a good document of Bowie’s 1978 tour, but this May ‘78 performance, taped for Germany’s Musikladen, has more spark.

The Scary Monsters tapes: While no outtakes from the Low, “Heroes” and Lodger sessions have come out without Bowie’s approval, some studio demos, backing tracks and early versions of songs from Scary Monsters have been bootlegged. (See “Cameras in Brooklyn,” an early version of “Up The Hill Backwards”.

The Leon sessions: Bowie’s 1.Outside album began in 1994 as Leon, a set of improvisatory sessions with the likes of Bowie, Brian Eno, Reeves Gabrels and Mike Garson, the fruit of which were edited into three roughly 20-minute “suites.” Never released, with some pieces later incorporated into Outside, the suites were bootlegged in drips and drabs over the years, which made getting a grip on Leon a bit of a challenge. However, the complete suites finally leaked in late 2014 and they’re worth hearing—it’s arguably Bowie’s post-Scary Monsters masterpiece. (All up on YT at present: here’s “The Enemy Is Fragile suite” and “Leon Takes Us Outside”.

Toy: Bowie’s self-covers album, recorded in 2000 and rejected by his label, leaked in 2011, setting the stage for Bowie’s surprise return (and so raising speculation that DB himself had given the green light to whoever torrented the thing). It had an unearned reputation as a lost classic, although “Uncle Floyd” is one of Bowie’s best late-career recordings.

1 thought on “The Unofficial Bowie – A Conversation Piece”