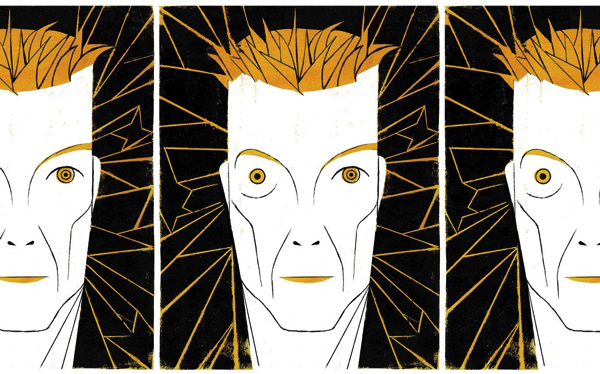 The full interview is available to view online, but for those that don’t understand Dutch, our man in The Netherlands, Maurice, kindly supplied the following.

How Bowie came to work with Van Hove: When producer Robert Fox contacted Van Hove by mail about working with Bowie, Van Hove initially thought someone was playing a joke on him. But just in case it wasn’t a prank, he decided to reply in a not too eager kind of way. Robert Fox immediately called him and three weeks later Van Hove met DB in his New York office. 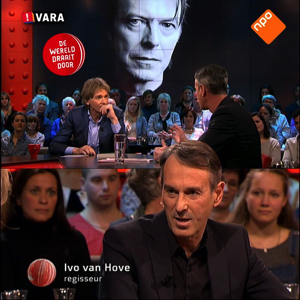 ded a director for the Lazarus project and they didn’t want to create a typical Broadway musical.


About meeting Bowie: Van Hove didn’t want to present himself as an excitable fan, even though he admitted he had been all his life. After twenty minutes, it was clear that Bowie was more than aware of Van Hove’s previous projects. This knowledge gave Van Hove the courage to admit that he had seen Bowie perform in the Elephant Man at the Booth Theatre in New York, to which Bowie apparently replied: ‘You must have still been in your diapers then!’. Van Hove was 18 at the time.

On Lazarus: According to Van Hove, Bowie has already composed 4 new songs for Lazarus. Older songs will be re-arranged for the music theatre play (Van Hove preferred to call it a music theatre play instead of a musical), or, as Bowie put it to him: ‘I’m gonna put them in a new skin’.

On the script: During the interview Van Hove had the script laying in front of him, but was careful not to let the cameras see it. Then, encouraged by the host, he started to read a little from the opening scene while saying he would keep the character’s gender unspecific. After reading a tantalising excerpt in English, Van Hove invited the host to guess what the opening song is. The host guessed Space Oddity to which Van Hove smiled and agreed that that would be fantastic.

On Bowie’s efforts to move freely around NY: Van Hove recounted that Bowie makes every effort to live his life as a private person and that he manages to go about his business in New York anonymously but without having to use disguises.

On seeing the 1972 TOTPs Starman clip: In the same way that it affected many others, Van Hove described just how much the BBC’s Starman footage meant to him when he first viewed it. The fact that DB’s flirtation with Ronson was shown openly on TV made him feel more comfortable about having feelings for other boys.

The interview ended with Van Hove explaining that he will continue his projects for the Amsterdam Theatre company. He also reminded viewers that Bowie will not perform in the play himself.