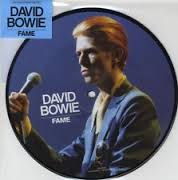 The colour image used on the A-side of the picture disc is by Andrew Kent taken whilst David was performing Golden Years on the Soul Train TV show in November 1975. He also performed Fame on the show on account of its recent success on the Billboard Hot 100.

The AA side image is an outtake from a session with renowned 1940’s/50’s Hollywood photographer Tom Kelley.

FAME is released on Parlophone on Friday July 24th 2015.

FOOTNOTE: You may have noticed that we normally use the Monday UK release date when mentioning new releases. However, in February a Global Release Day was confirmed so that new music releases will be aligned internationally on a Friday.