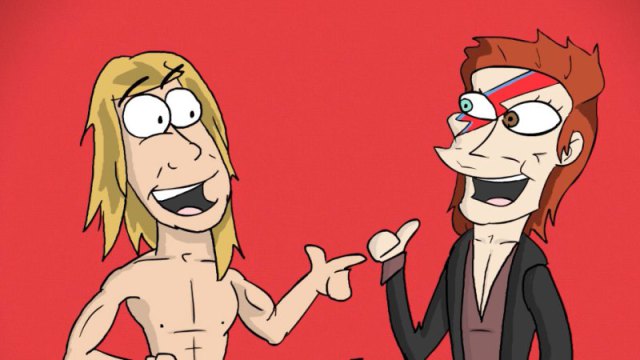 On Minimation, we comb through the archives of legendary New York radio station WNEW-FM and animate interviews with legendary rock artists. This installment is taken from a 1986 interview with Iggy Pop, who discussed how he first met David Bowie, one of his biggest fans. This Minimation was created for Radio.com by  Max Werkmesiter.

In 1986, Iggy Pop was enjoying a comeback of sorts, thanks to his hit cover of Johnny O’Keefe’s “Wild One” (retitled by Iggy as “Real Wild Child (Wild One)”) from his Blah Blah Blah album. Much of the album featured songs co-written by Iggy and his old friend and collaborator David Bowie.

Bowie produced and co-wrote songs for Iggy’s solo debut, 1977’s The Idiot and 1977’s Lust for Life.  But before that, the two worked together when Bowie mixed the final (at the time) album for Iggy’s former band, the Stooges.  (Bowie’s mixes became the subject of many debates among Stooges fans, and Iggy re-mixed the album for a 1996 reissue).

Related: Iggy Pop Gets Apology From Amnesty International for Implying That he Thinks Justin Bieber Sucks

From the vaults of WNEW-FM 102.7 – New York’s Rock’ n Roll station, Radio.com Minimation presents a 1986 interview with Iggy Pop, where he recalls his first meeting with David Bowie

Iggy Pop explains the role David Bowie played in his emergence as a solo artist in this 1990 interview with MTV.