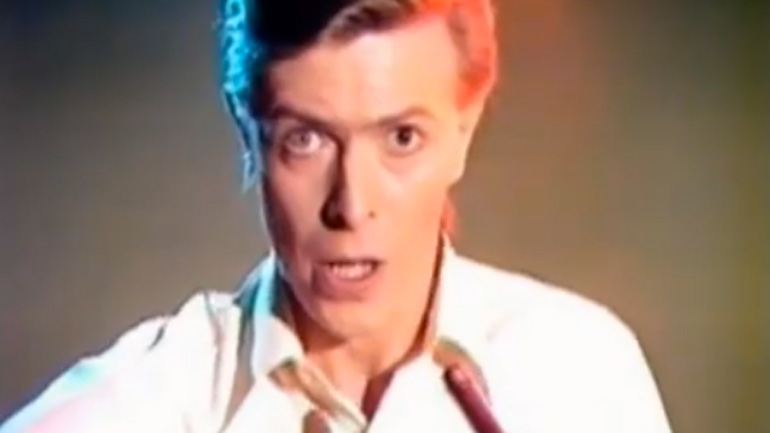 This one took quite a bit of work, and I’m honestly still not completely satisfied with how it turned out but…I’ll leave that up to the rest of you to debate. So how this particular idea all started was that I remembered seeing a version of this that had been broadcast on Rage that slightly extended to fit the full song with first some sort of stock footage and then clips from the “Ashes to Ashes” video; I’ve always rather liked that for, if nothing else, then we get the whole song! So I started with a VHS recording of the very beginning of said broadcast, just for the stock footage, which then quickly cuts to the shots from the “Ashes to Ashes” video (I simply used a rip here from the official YouTube upload). I have to give enormous thanks to my online friend and Bowie colleague Matt Day for sending me a *very* good quality VHS recording of the original broadcast. I recorded this copy, with ScreenFlow, as it played in VLC with the de-interlace mode enabled, cropped only slightly, and then exported to 720p AppleTV settings. Once in iMovie, I left as much of the picture alone as I possibly could, but obviously some serious de-saturating, and just a bit de-brightening, was required. I used the 2009 remaster of the song from the 40th anniversary “Space Oddity” digital EP, thus far the most recent remaster this particular recording has received. Some slight video speed adjustments were also required here and there, just to make sure everything was still in sync. Exported to QuickTime with the x264 encoder and NO de-interlacing or sharpening filters (trust me, I went through about 10 trials with the latter before realizing that was the problem I was having with the end result looking so saturated). As already stated, this was a *lot* of unexpected work but I sincerely hope my fellow Bowie fans enjoy it and forgive it its possible shortcomings.