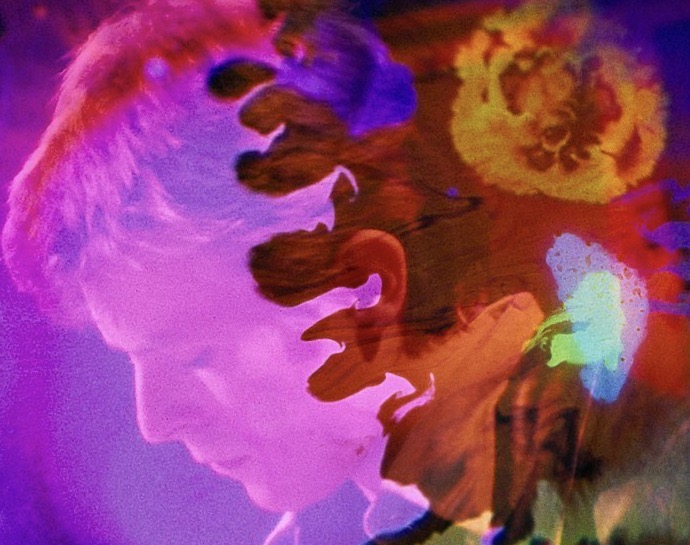 Moonage Daydream, a new historical film about David Bowie, will premiere at Cannes Film Festival next month, reports Variety. The movie is officially sanctioned by Bowie’s estate and features previously unreleased 35mm and 16mm footage from his personal archives. Moonage Daydream is directed, written, and produced by Brett Morgen (best known for Kurt Cobain: Montage of Heck), and will make its streaming premiere on HBO and HBO Max in spring 2023. According to U.S. distributor Neon, the film is five years in the making.

Variety first reported the news of Moonage Daydream last November. At the time, a source told the publication that the film is “neither documentary nor biography, but an immersive cinematic experience built, in part, upon thousands of hours of never before seen material,” including concert footage. It was also reported that Tony Visconti, Bowie’s longtime producer, served as the film’s music producer.

Moonage Daydream illuminates the life and genius of David Bowie, one of the most prolific and influential artists of our time.

With MOONAGE DAYDREAM, Brett Morgen (The Kid Stays in the Picture, Kurt Cobain: Montage of Heck, Jane) presents a genre defying immersion into the art and sounds of David Bowie. Considered one of the greatest artists of our time, David Bowie has been moving culture for over 50 years. MOONAGE DAYDREAM is the first film to be supported by the David Bowie Estate, which granted Morgen unprecedented access to their collection.

Told through sublime, kaleidoscopic imagery, personal archived footage, unseen performances, and anchored by David Bowie’s own music and words, MOONAGE DAYDREAM invites audiences to immerse themselves in the unique world that is “Bowie”.

In 2018, Morgen was granted unprecedented access to Bowie’s archives which encompasses a lifetime of materials, including an extensive catalog of unseen footage and personal collection of his own art and poetry. Morgen spent four years assembling the film and another 18 months designing the soundscape, animations, and color palette.

For the film, the sound team, featuring Bowie’s long-time collaborator, friend and music producer Tony Visconti and Academy Award®-winning sound mixer Paul Massey (Bohemian Rhapsody) remixed and translated Bowie’s original stems for a theatrical environment that will be presented in 12.0, 5.0, Atmos, and 7.1/5.1.

Throughout his career, across generations, Bowie taught us that our differences were our strengths. With MOONAGE DAYDREAM, Bowie provides us with a roadmap of how to survive the 21st century, inviting audiences to celebrate his legacy and enduring influence like never before.

Brett Morgen has been called “the leading revolutionary of American Documentary film” by the Wall Street Journal.  His credits include JANE (2017), KURT COBAIN: MONTAGE OF HECK (2015), CROSSFIRE HURRICANE (2012), JUNE 17, 1994 (2010), THE KID STAYS IN THE PICTURE (2002), and ON THE ROPES (1999).  He has received nearly every industry honor including the DGA, PGA, A.C.E., WGA, and IDA awards for Outstanding Documentary.  He has also received the Emmy Award Best Director, 9 individual Primetime Emmy nominations, 18 Primetime Emmy nominations for his past three films, two Peabody Awards, and both BAFTA and Academy Award nominations. Morgen has recently completed work on MOONAGE DAYDREAM, the first authorized film about David Bowie.

When David Bowie’s album Blackstar came out at the end of 2015, it was the fourth album in a row music producer Tony Visconti produced for David. Blackstar was one of the most celebrated albums of the year and the decade winning two Grammys and the Album of the Year

at the Brit Awards!

Since Bowie released his eponymous album, David Bowie, produced by Tony Visconti in 1969, the New York-based music producer has always been a vital part of the most decisive moments in Bowie’s career. Visconti also provided musical direction for T. Rex’s recordings as well as albums by Sparks, the Moody Blues, Thin Lizzy, Morrissey, Angelique Kidjo, Kaiser Chiefs, Alejandro Escovedo, The Damned, The Move, Badfinger, Kristeen Young and many others. Visconti was born in Brooklyn and moved to London in 1967 to begin his stellar career in the music industry that led to him being one of the most important pop producers in history. His unique life path is shared in his autobiography: Bowie, Bolan, and the Brooklyn Boy. Visconti, artist, music producer, and author, lives in New York City and looks toward the future with pure excitement. Recent albums he has produced include Emily’s D + Evolution for Esperanza Spalding, produced and mixed Optimist in Black for the singer, English socialite and actress Daphne Guinness, produced Merrie Land for the English art rock supergroup, The Good, the Bad &amp; the Queen, and produced and mixed Perry Farrell’s Kind Heaven release. Tony arranged and conducted strings for Foo Fighters on their song, “I Am A River,” from the Sonic Highways album and arranged two songs for the jazz artist Donny McCaslin’s 2023 album. Additionally, Tony has toured the world with his band presenting the music of David Bowie, hosted two seasons of musical television programs, Sky Television’s Guitar Star (2015 and 2016) and Tony Visconti’s Unsigned Heroes (2017). He also chairs the Anchor Award as head judge at The Reeperbahn Music Festival in Hamburg, Germany every year since 2016.

Stefan Nadelman received a BFA from Iowa State University where he studied drawing, painting, printmaking, and graphic design. Starting his career as a web designer and Flash animator during the dot com bubble, he spent his spare time animating until he was able to submit his short films to Resfest and then Sundance where he won the short film jury prize for Terminal Bar.

Since then, Stefan continues to collaborate with directors such as Brett Morgen, Judd Apatow, Amir Bar-Lev, Chris Smith, R.J. Cutler, and Cullen Hoback, Stacy Peralta on their documentary projects.

John Warhurst is one of the film industry’s most accomplished sound editors, having supervised blockbuster soundtracks such as ’Bohemian Rhapsody ‘, for which he won a BAFTA and an Oscar© in 2019 alongside Supervising Sound Editor, Nina Hartstone. Originally from Brighouse in West Yorkshire, he has worked on films such as the award-winning ’Les Misérables’ as well as ‘Sweeney Todd: The Demon Barber of Fleet Street’, and the film documentary starring One Direction, ‘This Is Us’. After graduating from the University of Huddersfield with a BMus [Hons] degree in Orchestral Composition and Arrangement he decided to continue on to postgraduate study with a Master’s degree in Electro-Acoustic Composition. His Oscar© for the film Bohemian Rhapsody is seen by many as the crown jewel of film industry accomplishment, but this wasn’t his first award. His introduction to the red carpet came in 2013 when he was part of the sound and music team on the film musical ‘Les Misérables’, which picked up Best Sound at the British BAFTA Film Awards. John’s skills as a sound editor have also been heard in cinemas and movie theaters around the world in the films ‘The Woman in Black’, ‘127 Hours’ and ‘Three Billboards Outside Ebbing Missouri’, ‘Lord of the Rings: Return of the King’ and ‘Harry Potter and the Chamber of Secrets’. The soundscape he created for the David Bowie documentary experience, ‘Moonage Daydream’ showcases his talent. He is currently supervising the sound of the upcoming Whitney Houston biopic ‘I Wanna Dance with Somebody’.

Nina Hartstone is an Oscar©-winning Supervising Sound Editor, primarily known for her sound editing expertise in dialogue, ADR, crowd design and vocals. In recent years, she has specialized in musical films alongside Supervising Sound and Music Editor, John Warhurst. She holds a BA (Hons) in Visual and Performing Arts and has worked in the film industry for nearly 30 years. Starting out in the cutting rooms at Pinewood Studios as a trainee, she worked her way up through the sound editorial ranks to the role of Supervisor and is now passionate about nurturing the next generation of sound creatives, with a particular focus on encouraging diversity through equal representation. Nina has participated in industry panels and given presentations at film festivals and educational establishments around the world, including the Santa Barbara International Film Festival, NAB in Las Vegas and The National Film and Television School. She has worked alongside leading industry professionals to devise and implement innovative ways of recording, creating and editing sound for film. Her credits include titles as diverse as ‘Everest’, ‘Enola Holmes’, ‘An Education’, ‘Pokèmon: Detective Pikachu’, ‘Evita’ and the multi award-winning blockbuster, ‘Gravity’. In 2019, this work was recognised with Academy Award©, BAFTA, AMPS and MPSE wins for sound editing on the smash hit film, ‘Bohemian Rhapsody’. She recently turned her skills to the eagerly awaited David Bowie documentary experience ‘Moonage Daydream’ and is currently working on ‘I Wanna Dance With Somebody’, the highly anticipated biopic about Whitney Houston.

Master and Commander: The Far Side of the World (2003)

IN ASSOCIATION WITH HBO DOCUMENTARY FILMS

WRITTEN, DIRECTED, AND EDITED BY

ANIMATION AND GRAPHICS BY

A FILM BY BRETT MORGEN

FEATURING THE WORK OF

MUSICAL MASH-UPS DESIGNED AND EDITED BY

Color and Finish by Company 3

IT / SECURITY CONSULTATION PROVIDED BY Feedwire

FOOTAGE AND AUDIO MATERIALS COURTESY OF

National Film Board of Canada

FOOTAGE AND AUDIO MATERIALS COURTESY OF

Reelin’ in the Years Productions LLC

Excerpt from “Ricochet” by Gerry Troyna

PHOTOGRAPHS AND ARTWORK PROVIDED COURTESY OF

A Night Out (1915) The Essanay Film Manufacturing Company / Charlie Chaplin

‘Your Mother Wouldn’t Like It’ with Nicky Horne / Capital Radio

‘Three Studies For Figures At The Base Of A Crucifixion, Panel I’ / Francis Bacon / 1944

‘DANCING TO THE MUSIC’ / TIME Magazine

“ALL THE YOUNG DUDES”

“THE WIDTH OF A CIRCLE”

“I HAVE NOT BEEN TO OXFORD TOWN”

BY ARRANGEMENT WITH SONY MUSIC ENTERTAINMENT

“A NEW CAREER IN A NEW TOWN”

COURTESY OF NAXOS OF AMERICA, INC.

BY ARRANGEMENT WITH SONY MUSIC ENTERTAINMENT

“MEMORY OF A FREE FESTIVAL”

BY ARRANGEMENT WITH SONY MUSIC ENTERTAINMENT.

“SONS OF THE SILENT AGE”

COMPOSED BY PHILIP GLASS FROM THE MUSIC OF DAVID BOWIE AND BRIAN ENO.

COURTESY OF NAXOS OF AMERICA, INC.

Starman Productions LLC is the author and creator of this motion picture for purposes of copyright and other laws in all countries throughout the world.

This motion picture is protected under laws of the United States and other countries. Any unauthorized exhibition, distribution or reproduction of this motion picture or videotape of any part thereof (including the soundtrack) may result in civil and criminal penalties.