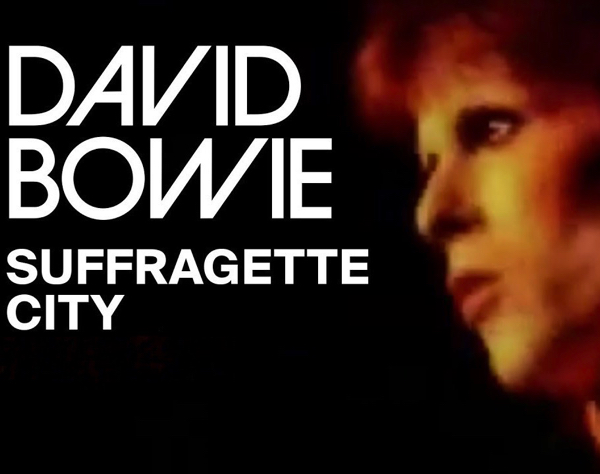 “Suffragette City” acted as the second single for David Bowie’s The Rise and Fall of Ziggy Stardust and The Spiders From Mars – a lauded glam rock record that is currently enjoying the 50th anniversary of its release.

Originally shared as a B-side for his inter-galactic anthem “Starman,” “Suffragette City” tells one part of the titular Ziggy’s sexually-charged story, amid the glitz and high-powered rock the English artist made his name on.

The Story of Ziggy

The eleven tracks on Ziggy Stardust all play out the story of an alien rock superstar and his pursuit to save earth from an apocalyptic disaster. Throughout the LP, Bowie paints Ziggy as an androgynous-rebelling spirit and touches on the artificiality of rock music, political issues, drug use, sexual orientation, and stardom.

Retrospectively, the album is considered one of Bowie’s best works and has appeared on countless lists of the greatest albums of all time. Bowie toyed with the idea of creating a musical based on the concept record, but it never came to fruition. Ziggy has been reissued several times including a forthcoming release for the 50th anniversary. The vinyl set, complete with a mastered LP and picture disc, will be shared on June 17—50 years and one day after the original UK release date.

Meaning behind the lyrics of “Suffragette City”

Though the song’s title would naturally conjure up images of women in petticoats picketing for the right to vote, “Suffragette City” has actually been interpreted in far more suggestive ways, with a couple of proposed meanings taking the lead.

The first sees Ziggy lament his friend stopping him from getting laid. Sexually charged and dangerous in particular Bowie fashion, he borrows from a host of pop culture references to rag on “Henry” for getting in his way.

The first reference in Bowie’s cultural grab-bag is Anthony Burgess’ A Clockwork Orange. In the lines above he makes use of the main character Alex’s “droogies” – a name given to his gang of vandals. Bowie also uses The Velvet Undergound’s “hey man!” backing vocals from their 1896 song “White Light/White Heat” as an opener for most lines in the track.

The other leading interpretation points to Bowie’s alleged bisexuality.

In this interpretation, Henry takes on the role of a lover that has been cast aside by Ziggy in favor of a woman. The lines There’s only room for one and here she comes and Oh don’t lean on me man, ’cause you can’t afford the ticket tell Henry that he cannot bring Ziggy back to his side. I’m back on Suffragette City points to his sudden favor of women over men

Though Bowie has already completed much of “Suffragette City” before he went to see the Stanley Kubrick adaptation of A Clockwork Orange, the provocative film heavily influenced the final version of the track.

“I liked the malicious kind of malevolent, viscous quality of those four guys [in the movie],” recalled Bowie. “although the aspects of violence themselves didn’t turn me on particularly…Even the inset photographs of the inside sleeve for Ziggy owed a lot to the Malcolm McDowell look from the poster—the sort of sinister-looking photograph somewhere between a beetle, not a Beatle person, but a real beetle and violence.”

The garbled storyline in the track was inspired by Bowie’s adopted “cut-up” technique of lyric writing he learned from Beat writer William S. Burroughs but, is most heavily associated with Anthony Burgess’ A Clockwork Orange novel.

“The whole idea of having this phony-speak thing—mock Anthony Burgess-Russian speak,” Bowie continued, “that drew on Russian words and put them into the English language, and twisted old Shakespearean words around—this kind of fake language…fitted in perfectly with what I was trying to do in creating this fake world or this world that hadn’t happened yet.”

Since its release, “Suffragette City” has received widespread critical acclaim. Many critics hail the song as Bowie’s paramount moment as a rock & roller as he fully leans into high-velocity, guitar-leading musicality.

It has long been noted as encompassing everything fans love about David Bowie—an unpredictable rocker with a penchant for sex. Bowie more than likely drew on experiences from his own life as well as the culture around him for the track, creating an effigy for not only the era but his trailblazing contributions to the genre.