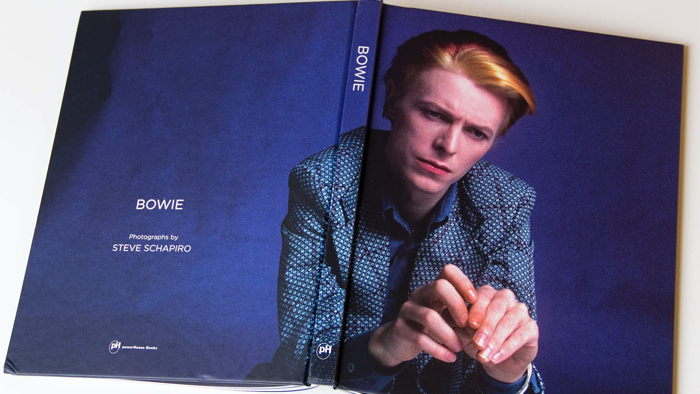 Martin Luther King Jr and the Selma march, Marlon Brando on set in “The Godfather” (and more than 200 films and 100 movie posters), Robert F Kennedy on the presidential campaign trail, Frank Sinatra, Muhammad Ali, Andy Warhol, Nico, Barbra Streisand are just some of the recognizable people Steve Schapirohas documented on camera. “All through the ’60s, ’70s, ’80s and ’90s, I’ve certainly been a workaholic,” the 82-year-old photojournalist tells CH with a chuckle. In 1974, he was asked by David Bowie’s manager to come to LA and do a private photoshoot with the young pop star, who had released The Rise and Fall of Ziggy Stardust a few years before.

Coinciding with the timing of Bowie’s album Blackstar, Schapiro’s new photo book, set to reveal many shots from this 1974 session plus a few later images (Schapiro was on set for Bowie’s sci-fi film “The Man Who Fell to Earth”), had been scheduled to publish in 2016. Before its release, however, Bowie departed from the world, at the age of 69, from cancer. Knowing that he’s gone makes it that much harder to open the pages of “Bowie” and see the legendary artist silently look back into our eyes, with a smile, having fun in wild costumes we haven’t seen before, in poses that weren’t selected to become iconic. Bowie’s unmatchable charisma soon outpaces the sadness, however, and within the pages, Schapiro has captured quiet and spirituality that’s oft missing plethora of glossy art books about the music icon. We spoke with Schapiro over the phone to learn more about his view from the camera.

Can you explain the significance of the book cover shot?

In the start of the book, he’s wearing a black outfit. When we did our shoot in ’74, he went into the dressing room and he painted these diagonal white stripes on his outfit and painted his toes white. And when we saw the “Lazarus” video, he had repeated that outfit for the first time. He was in a very spiritual mood in ’74 and this sort of continued that whole spiritual sense that David had.

How was shooting with Bowie different from other celebrated people?

He was an over-intelligent person with a spiritual nature, a great look and incredible imagination. He had all kinds of ideas. I think he didn’t like repeating himself also. I think he liked to do new things all the time. Because he was very intelligent, there was this great sense of growth that his career indicated.

First of all, the ideas in the shoot are very, definitely David’s. My job was just bringing David’s ideas into the light of day. There are a lot of shoots where I have to really move it along or find a way to get the right attitude or interesting reactions. But with David, that was not so at all. He came with a whole range of costumes, which it seemed to me, he was trying out in terms of creating new characters.

With the people I work with who are really with it, it usually it is a collaboration, said or unsaid. Because you’re both working in the same direction, trying to do something either iconic or very good. You’re trying to do an image that will work—and either will personify the person or bring in a new idea.

Just before this, I did a book on the hippie generation today, called “Bliss.” I had photographed Haight-Ashbury in ’67 and my son Theophilus got me involved in doing a book on the neo-hippie movement today, which is much different. Whereas Haight-Ashbury was into heavy drugs and ties from that, the neo-hippies—or what they call “Bliss Ninnies”—are really into meditation, open-eye contact, yoga, good organic foods, etc. There’s a big change and that’s what this book was about. We went to a lot of music festivals throughout the United States, even to Ireland.

I’m doing a book now on a place in Chicago called Misericordia. People who have developmental disabilities, who [used to spend] their time sitting, watching television and not doing anything at all—this is a place where everyone is active from morning to night. They have a bakery, they make food, they do sports, they package coffee for Trader Joe’s, and working with computers. And suddenly, their whole personality comes out. It’s an amazing place; my wife and I constantly went there. I’ve been shooting there since 2014. It’s just a place filled with joy. That’s a project I’m finishing up right now and will come out later this year.

What are you shooting with now?

Right now I’m shooting digitally, but l’m going back to black-and-white because I like the feel of it. I’m starting to shoot film again.

What attracts you back to black-and-white?

I think it conveys more of an emotional look. The best way I can explain it is, if you’re photographing an emotional situation between two people and suddenly someone comes in a yellow slicker or a red jacket and stands between them, your eye is going to go immediately to that person. Whereas in black-and-white, they would just fade away; they would not be important. So there’s a different palette for shooting in black-and-white and shooting in color. Black and white tends to convey emotion much more easily because it’s simpler and there isn’t much divergent color coming in. But you can do emotional things in color, too: the “Bliss” book is in color and most of the David Bowie book was in color.

There are so many art and photo books about David Bowie, but this one sticks out to me.

I think this is a very different book. I think most of the books really centered on performance, wild costumes and really showing the [extreme] changes. What this book I think has is much more of a sense of the spiritual side of David. Even the last pictures in the book, I really feel strongly, I really like the last two pictures, because they’re simple. The picture of him with his hands, just sitting. There are some quiet pictures in the book that I think work really well.

“Bowie” is $35 from powerHouse Books and a little later will be available on Amazon.

Photographs by Steve Schapiro, published by powerHouse Books: David seated drawing circles on the background paper and then the Kabbalah Tree of Life diagram on the floor, Los Angeles, 1974; David relaxed at his house in Los Angeles, 1975; all other book images by Cool Hunting