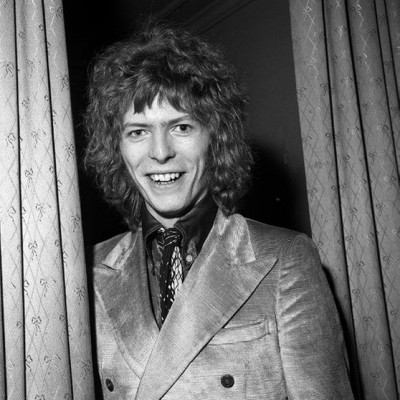 In the fall of 1970, a young musician from London arrived in Los Angeles to work on demo tapes for what he and his manager hoped would be a recording contract with a major label. It was David Bowie’s first trip to the United States.

A few weeks after David Bowie’s death on January 10, 2016, sound engineer Ron de Strulle granted an exclusive interview on his work with Bowie. As recording engineer at Roxbury Road Studios in the Hollywood Hills, de Strulle and his partners Tom Ayers and Aynsley Dunbar were in contact with an executive at United Artists who asked if they could host “a new talent from across the pond who was beginning to make a big stir.” Impressed by the quality of recordings produced at RR Studios, United Artists promised Bowie’s manager that his client would have privacy, first class treatment, and 24/7 access to the studio. De Strulle’s song To Be Love was the first that Bowie recorded during that historic two-week trip. As the rights holder, Ron de Strulle is releasing To Be Love in loving memory of his friend David.
Today’s release of “To Be Love” marks an end and a beginning, a piece with both historic and musical value. Not only is it the first song David Bowie recorded in the U.S., it is also his final track.

In the fall of 1970, while Bowie’s manager was talking deals with Capitol and Atlantic Records, the young musician was busy recording and polishing tracks for a demo that would lead to his first U.S. album: Hunky Dory. TIME magazine called Hunky Dory one of the “100 best albums of all time.”

“My first impression of David was that he was warm, open, friendly, and not looking for star treatment like most of the other artists who came to RR Studios. He was interested in the production process and excited about anything creative,” says de Strulle whose job it was to facilitate Bowie’s ideas. “He was blown away by the studio and very interested in how to get each sound. He loved John Lennon’s vocal effects and George Martin’s way of working with bands of sounds with different frequencies,” de Strulle remembers.” He couldn’t get over the way we could produce loop delays and reverberation plays. David could pick up an instrument and play anything. “He would say ‘I never played this instrument before,’ and then he would cut loose and play. Pure genius.”

During that first all-night session, Bowie had 5 demo songs which were just about complete. “He was looking to create a couple of signature styles to promote to the record companies,” says de Strulle. “David brought ideas and lyrics and we cut some rough tracks. If I played a few bars on the keyboard, he could see the whole picture and he could integrate it into his own work.”

But when David offered to record de Strulle’s To Be Love, it was the recording engineer’s turn to be blown away. Having recorded a few simple versions, de Strulle was thrilled when Bowie “insisted on recording another version with him playing drums.” The young musician had arranged what he called “a signature drum style in need of naming” to try out on a couple of his demos. “He said it was perfect for To Be Love,” says de Strulle. “David loved that song and wanted to do harmony. He said its simple chords and simple melodies were ‘like bringing Billie Holiday into the 1970s.’”

“The second evening was the first time I saw David in drag,” de Strulle recalls. “I took him to Whisky a Go-Go and Troubadour, two popular nightspots where I used to show up with my pet timber wolves Mariah and Wiley.” At his request, de Strulle brought Bowie to a Topanga Canyon biker bar. “I was there to look straight and hustle him out if need be,” says de Strulle, adding that there was no trouble. Bowie was recognized by fellow musicians who were familiar with his first albums recorded in London: David Bowie (Deram, 1967); Space Oddity (Philips, Mercury, 1969); and The Man Who Sold the World (RCA, 1970).

Three days later, Bowie convinced de Strulle to go out with him in drag. “David said he was uncomfortable going out with me in a suit. ‘I have a nice dress for you,’ he said.’” De Strulle had an androgynous stage act, Ronnie Rock-its. “I wore silver and gold lame jackets on stage. But I felt stupid in lipstick. Even so, I gave in and went out with him in drag.”

Apart from occasional sorties into the LA nightlife, most of their time together was spent in the studio. “David was looking to develop characters. He was working on Ziggy Stardust and songs to go with each of the personas. I was working to get his songs into the best shape possible for record companies,” says de Strulle. “David liked alternate vocal effects with echoplexes. We had play delays and unique effects so you could have an echo before the actual vocal. David liked that. He said it was something he was looking for in some of the songs he was doing.” De Strulle explained how he could set the echo as far in front as he wanted or they could set up a tight echo. “Most of the time we sat around looping from one machine to another playing with all these special effects.”

About half a dozen of the 15 presentation pieces that Bowie’s manager shopped around to Capital and United Artists in LA and RCA in New York were produced at RR Studios. Several tracks that Bowie recorded with de Strulle ended up on Hunky Dory. “At RR Studios, he developed his signature heavy back beat and double bass,” says de Strulle. “Ten years later, everyone would refer to David’s rhythm as new disco.”

In her essay Go Put On Hunky Dory by David Bowie, Jeva Lange writes,
“For someone as prolific and ever-shifting as Bowie, the singer’s fourth album is still the best chance we have to hear all the different shades of him in one go — the outer-space song alongside the song for kooks, a track about Andy Warhol following up a command to fill our hearts. Hunky Dory is both a “start here” album and an “end here” album, even though so many of us never thought there’d truly be an end.”

Bowie’s compassion and social conscience remain as impressive as his musical genius. “Socially and musically, he was brilliant,” says de Strulle. “David was concerned about human rights and contributed financially to help a drought-stricken region in Africa years before it was fashionable.”

Of the three record companies that were wooing him, Bowie signed with RCA Records because they agreed to give him full creative control. De Strulle says, “He saw United Artists as a bunch of bullies. After a few days of meeting with senior people, he confided in me that there was no way he was gonna work with them.”

Having made his decision, Bowie asked de Strulle to drive him to LAX where he boarded a plane to JFK. Soon after his arrival in New York, he signed with RCA Records and de Strulle lost contact with him. “He taught me so much, especially about vocal harmonies for different genres. He told me not to listen to other people. He said, ‘Just rely on yourself. Don’t listen to what other people are saying. What you have is unique.’”

Roxbury Road Studios closed in 1972. The property was eventually sold to Barry Manilow.

Ron de Strulle went back to his first love, science. In 1997, he earned one of New York University’s first interdisciplinary doctorates in biophysics, photo chemistry and photo biology. He went on to work at Woods Hole, Massachussets where he conducted an analysis of ozone layer ad photo plankton. He is the founder of a HPI-Oceantech, a not-for-profit organization dedicated to research into ecologically sound protocols for the marine environment.

Today’s release of To Be Love marks an end and a beginning, a piece with both historic and musical value. Not only is it the first song David Bowie recorded in the U.S., it is also his final track.

To Be Love can be heard at http://mindbodynetwork.com/david-bowie

“..and the end of our exploring will be to arrive where we started and know the place for the first time.”
T.S. Eliot, Four Quartets