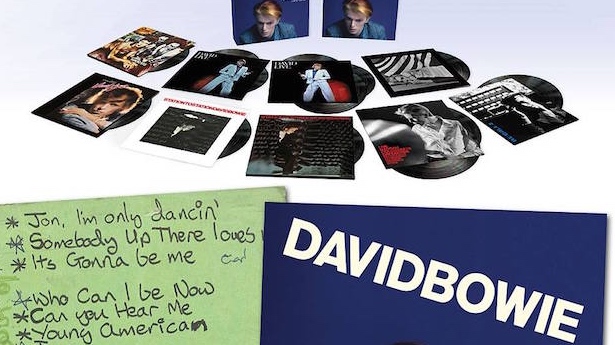 It includes the previously unreleased album The Gouster, remastered editions of Diamond Dog and Young Americans, and more

The full details of David Bowie’s Who Can I Be Now? – a box set that collects the rock legend’s works from his 1974 to 1976 “American phase” as well as his unreleased LP The Gouster – have been revealed.

Due out September 23rd, the box set arrives in a variety of formats – including a 13-LP, 12-CD box or digital download – that features newly remastered versions of Bowie albums like 1974’s Diamond Dogs, 1975’s Young Americans and 1976’s Station to Station, plus the live LPs David Live from 1974 and Live Nassau Coliseum ’76. David Live appears in both its original and 2005 mix formats, while Station to Station is included with the original version alongside its 2010 Henry Maslin mix.
Who Can I Be Now? also boasts a pair of compilations unique to the box set: The Gouster – Bowie’s original vision for what ended up becoming Young Americans, featuring unreleased alternate mixes of the Young Americans tracks – plus Re:call 2, which compiles all the single edits and B-sides from this era in Bowie’s catalog, including a largely unreleased Australian edit of “Diamond Dogs” that was only available in that country until now.
Bowie’s longtime producer Tony Visconti described The Gouster as an “outrageous brand new, funkafied version of David’s classic.” Visconti also oversaw the mastering on The Gouster’s original tapes for the release.
The box set, which follows 2015’s Five Years (1969-1973), also touts a hardcover book with rarely seen and previously unpublished photos, historical press reviews and technical notes about the albums from Visconti and Maslin. 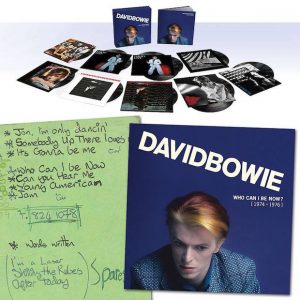 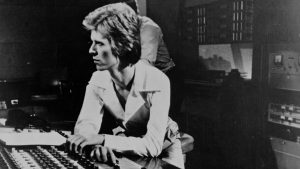 Tony Visconti note
‘Gouster was a word unfamiliar to me but David knew it as a type of dress code worn by African American teens in the ‘60’s, in Chicago. But in the context of the album its meaning was attitude, an attitude of pride and hipness. Of all the songs we cut we were enamored of the ones we chose for the album that portrayed this attitude.
David had a long infatuation with soul as did I. We were fans of the TV show Soul Train. We weren’t ‘young, gifted and black’ but we sure as hell wanted to make a killer soul album, which was quite insane, but pioneers like the Righteous Brothers were there before us.
So ‘The Gouster’ began with the outrageous brand new, funkafied version of David’s classic ‘John, I’m Only Dancing’, a single he wrote and recorded in 1972, only this time our version sounded like it was played live in a loft party in Harlem and he added (Again) to the title. It wasn’t the two and a half minute length of the original either.
We maxed out at virtually seven minutes! With the time limitations of vinyl (big volume drop with more than 18 minutes a side) we could only fit two other long songs on side one, ‘Somebody Up There Likes Me’ and ‘It’s Gonna Be Me’ both about six and a half minute songs. We had hit the twenty-minute mark. Technically that worked because ‘It’s Gonna Be Me’ had lots of quiet sections where the record groove could be safely made narrower and that would preserve the apparent loudness of side one.
Side two also hit the twenty-minute mark with ‘Can You Hear Me’ saving the day with its quiet passages. Forty minutes of glorious funk, that’s what it was and that’s how I thought it would be.’
set to be the second Bowie box set following the release of Five Years – which spanned 12 discs and comprised 6 albums from his self-titled album to Pin Ups, alongside a heap of unreleased songs and two live albums.
Details of what will be included in this forthcoming Who Can I Be Now? set are to be announced next week, but it is expected to cover albums’ Diamond Dogs all the way through to Station To Station.