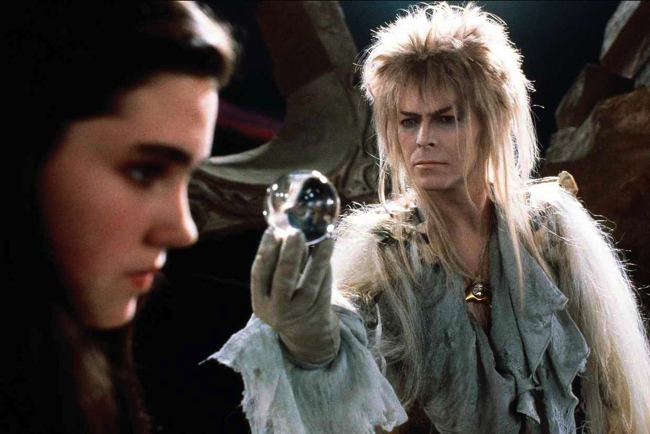 Growing up, Bowie was as influenced by surrealist art and film as he was by Little Richard and John Coltrane, says Paul Morley

One Sunday in spring 2013, when the David Bowie is exhibition was showing at the Victoria and Albert Museum, a series of films was screened in lecture rooms around the building to help represent his curious spirit and history. The main attraction was Bowie himself, cavorting in Labyrinth – a myth-mad mid-80s collaboration between George Lucas of Star Wars, Jim Henson of The Muppets and Terry Jones of Monty Python, in which Bowie effortlessly played Jareth the Goblin King as a cross between a spoilt, spiteful big kid used to getting his own way and an evil clown in a fright wig and spectacularly tight leggings.

By way of warm-up was Salvador Dalí and Luis Buñuel’s revolutionary 1929 silent film Un Chien Andalou, which Bowie used as the support act, or guest spot, on his 1976 Isolar tour. Twenty minutes later, there was dadaist Hans Richter’s 1947 hypnotic avant-garde mixture of film and psychiatry, Dreams That Money Can Buy. And then came Labyrinth, and the spectacle of Bowie slyly smuggling sex and brains into what many thought of as the silliest side of Lucas – the most blatant example of how Bowie could be both an amiable family entertainer and a far-fetched experimental pop star. Only Bowie could take you from the gleeful abandonment of linear time, via a film about a poetic vagabond who has the power to create dreams and sell them, to a slightly jaded gothic glitter-goblin who juggles crystal balls and can shape-shift into a barn owl.

Bowie had the strange, distorted timing of a clown; the mesmerising, time-travelling charisma of a crazily ambitious pop star; and the optimistic mind of a surrealist who believes in making the most of reality, however disappointing and frustrating it can be. He sincerely believed that art could transform the world, and he was as influenced by surrealism as he was by pop, and the rock history rapidly forming around him. His inspirations were Dalí, René Magritte and Marcel Duchamp as much as Little Richard, the Who and the Velvet Underground. His creative endeavour was always motivated by the desire to know more, not to constantly prove to others what he already knew – hence the constant, exciting, often astonishing changes in his music and appearance.
Bowie’s later-life interest and belief in the provocations and consolations of surrealism and dadaism are obvious from the content of his private art collection, now up for a sale, but he first came across the sensibility through music, television and film. As he was growing up, subversive, savagely original ideas often rooted in the avant garde and surrealism were making their way into the mainstream via the rapidly blooming popular culture – from the more adventurous films showing at the local cinema, through radio and emerging television – upsetting settled habits, challenging moral, aesthetic and ethical values, changing everything.

For young David Jones, growing up in the 1950s in Bromley, south London, his family worn down by circumstance and a turbulent history of mental illness, life seemed staged and restrictive. His response, as a feisty, idiosyncratic schoolboy was to set out to rearrange reality. Whatever boundaries there seemed to be, emotionally and intellectually, were set in place by your own imagination; you could break through them by how you responded to reality, how you accepted or rejected it. He was, in this sense, a surrealist before he even knew what surrealism was.

Influenced by one of his most important educators, his intermittently unstable half-brother Terry, the young Bowie’s listening habits slipped from everyday trad jazz into the free-er jazz of John Coltrane and Charles Mingus, where reality is not just departed from but transcended. For a tender, jumpy mind, such music could seem soothing, making sense through how it circles and chases and sometimes catches up with the crazy meaning of things.

This was one route for Bowie into the other spaces of surrealism, where artistically creative expressions can denote salvation and liberation. Oddly, so too was the British actor, singer and writer Anthony Newley, often derided as a corrupt, trivialising influence on Bowie.

When Bowie said later that he was inspired by the “space mysticism” of Syd Barrett’s Pink Floyd, as well as by Newley, anyone who had come across the latter’s absurdist and surreal 1960 ITV series The Strange World of Gurney Slade would conclude that of the two, Newley was actually the more psychedelic. He was an influence on Bowie as much for his unconventional eclecticism and misshapen Englishness as for his loopy vocal showmanship, his ability to zip together easy listening and an uneasy mental state.

An agitated comedy about displacement and disorientation in the early media age, the ultimate aim of Newley’s Gurney Slade was to resist the predictable and lacerate an audience’s complacency. For 13-year-old Bowie, stuck in Bromley, watching this vivid, wonky deconstruction of the suburban atmosphere would have been like taking LSD. It would have prepared him for what came next.

In 1961, he watched Robert Wiene’s silent classic The Cabinet of Dr Caligari, one of the founding creations of German expressionist film, influenced by German expressionist painting and itself an influence on the horror genre all the way to David Cronenberg and Lynch. Bowie would have seen in this movie a world that is warped, confused and unbalanced.

He never forgot Dr Caligari – the mysterious, menacing Carnival man, the drunkenly askew streets and buildings, the makeup of the sleepwalking fortune teller, the unnerving predictions of death. Perhaps he saw it too young, perhaps he saw it at exactly the right time, when he was looking for answers to questions about mental health and identity. Either way, flashbacks of Gurney and Caligari would occur for the rest of his life, represented through the mutant characters he played, the art and entertainment he designed and enacted, the unconventional life he lived. He never escaped their shadows, and the light they threw on the darkness of the mind.
Mixing and merging pop energies and the free-associating dreams and actions of surrealism, Bowie announced at the beginning of the early 1970s that the future was now. All you had to do – his attitude influencing the punks and post-punks that were soon to follow – was eliminate obstacles getting in the way.