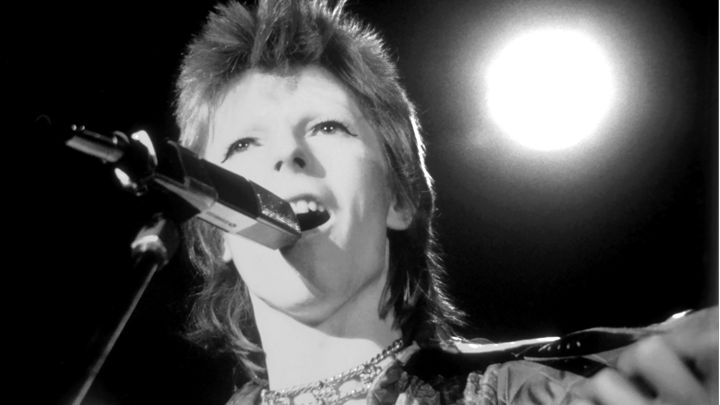 On Bowie is a celebration of the late, great rock legend’s life and career, by longtime Rolling Stone columnist Rob Sheffield. The book, out now, looks at all the ways David Bowie kept innovating over a 50-year career, from rock classics like “Space Oddity” to the majestic Blackstar, released this January on his 69th birthday – just two days before his death. On Bowie looks at the different roles Bowie played in his music – the glittery Starman, the Thin White Duke, the Aladdin Sane glam stud, the blonde MTV smoothie of “Let’s Dance.” In this chapter, Sheffield looks at the night Bowie truly conquered America – his 1972 breakthrough show in Santa Monica, California.

It makes sense Ziggy Stardust had to come to California to become a true star. The Pacific Ocean is the hole where the moon used to be – millions of years ago, the moon launched itself into orbit around the earth, floating in a most peculiar way, leaving a cavity that became the ocean. Bowie had to go there – only he could make it whole again. And Bowie needed America. Until he made it there, he hadn’t made it on his own terms – he needed a stage that grand, or else his concept would have been a flop. The kind of stardom Bowie was playing with needed American girls to scream over it, otherwise it was just an art project. He needed America the way a stripper needs a pole, the way a queen needs a throne.

It really clicked when he came to Santa Monica on October 20, 1972, a show recorded for radio broadcast and prized by fans as a bootleg years before it ever got legally released. This was his first real American tour, with the Spiders from Mars, just after Ziggy Stardust came out here. And until he got to southern California, the tour was a washout, playing to mostly empty houses in the Midwest. Some shows were cancelled for low ticket sales. He knocked them dead in Cleveland, the first U.S. city hip to Bowie, but NYC dismissed him as a hype. “We had our downs,” he says diplomatically in Moonage Daydream: The Life and Times of Ziggy Stardust. “St. Louis was not a Ziggy town.” In Kansas City, hardly anyone showed up, so he invited the crowd up to sit on the edge of the stage, until he tumbled off drunk. But the West Coast is where America met Bowie and fell in love. That night in Santa Monica, he finally became the special man.

Bizarrely, which is how many sentences about Bowie begin, you can hear it happen when you listen to the Santa Monica bootleg: the star and the audience get louder and chattier as the show goes on, like a blind date gone horribly right. The audience is quiet at first. Halfway through the show, after “Five Years,” the girls start to shriek “DAVID!” Until tonight, they probably had no idea who he was. They were just looking for a place to party. A couple of hours ago, they thought Deep Purple was the shit. Now they’re Those Bowie Girls.

It’s a pivotal chapter in the long-running and always-fascinating romance between English rock stars and California girls. For English rock boys, the goal was always to inspire crush juice in the lips and loins of California girls. Those were the fans they dreamed about. For any band worth its salt out of sleepy London town, the motivation to write great songs was to stir the amatory nectars of the sun-kissed vestals of the West Coast. And the more fiercely the California girls loved them, the better the bands got – a feedback loop that improved all our lives. Ever since the Beatles wrote “Drive My Car” (“to me it was L.A. chicks,” Paul said) that bond held strong, and nobody wooed those girls like Bowie. At the Santa Monica show, he’s face to face with those girls – he sings, they scream, he sings louder, they scream louder.

At first, he’s timid, realizing they’re hearing the tunes for the first time. But as the show goes on, he starts to soar on the crowd energy, saying things like “You’re terrific.” He might also be soaring on something else, judging from the way he improvises poetry like, “I asked for lobster tail and they brought me palm tree.” He’s doing all these songs they couldn’t possibly know, some that haven’t been released yet (“The Jean Genie”) and obscure covers (Lou Reed, Jacques Brel). He’s doing songs from Hunky Dory, no kind of hit in America, and Ziggy Stardust, which he’d just released; “Space Oddity” is the only tune that gets a “hey, we know this one” clap at the intro. The Spiders from Mars play faster than they need to – everyone’s swept up in the excitement. When they rip into “Hang On to Yourself,” they sound like the Sex Pistols. (Famously, the Pistols stole their microphones and PA system from Bowie after his 1973 show in London.) When Mick Ronson and Bowie join voices at the climax of “Five Years,” they’re nowhere near the same key, but too blissed out to notice, which was part of the message.

These are the kids Zeppelin wrote “Going to California” about, but Bowie’s a lot less coy about his affection for them. He declares that they’re much hipper than their older brothers and sisters, that the corrupt adult world won’t crush them, that their golden years are just beginning. And they decide they like what they hear. Of course, there’s a lot of heartbreak ahead for Bowie and his new audience – drugs, despair, Soul Train. L.A. would nearly destroy Bowie a few years later. But tonight, he’s a star because he makes them feel like stars. For once they’re not alone. And neither is he.