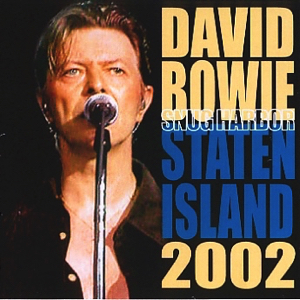 STATEN ISLAND, N.Y. — When he came here in 2002, rock legend David Bowie wore a red leather jacket, a chocolate-colored shirt and opened his set with the song “Life on Mars?”

The ballad was significant to where its singer was performing, the former home for retired sailors, Snug Harbor Cultural Center and Botanical Gardens.

“Sailors fighting in the dance hall,” the icon sang to 400 fans at Music Hall. “Oh man! Look at those cavemen go / It’s the freakiest show.”

The rock musician with the colorful alterego “Ziggy Stardust” broke barriers in music, fashion, identity, art and rebellion, starting with the release of his 1972 album, “The Rise of Ziggy Stardust and Spiders from Mars.”

Amid decades of producing hits like “Let’s Dance,” “Under Pressure” and “Heroes,” Bowie announced that he would be performing his first (and what would end up being his only) show on Staten Island for a five-borough “New York City Marathon” tour on October 11, 2002.

Our own Dean Balsamini covered the show — which, as he noted, was specifically catered to the borough’s audience. Here’s an excerpt from his piece:

Among the 50 or so people with Staten Island ties in the house was Bowie guitarist Earl Slick, a former Oakwood resident.

Before his finale, “Ziggy Stardust,” Bowie’s last words to the audience were “Bye, Staten Island.”