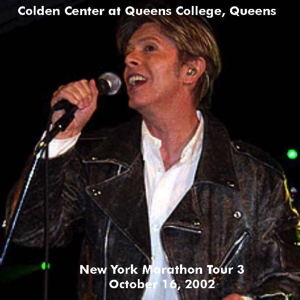 A very talkative Bowie during this show 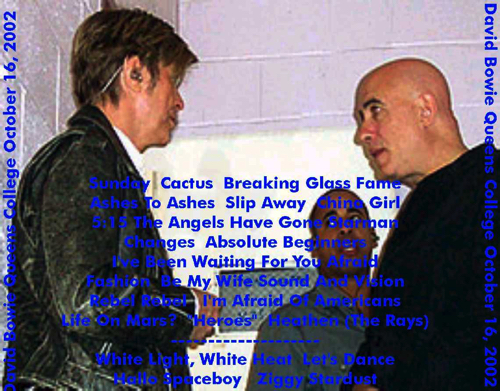 A concert apiece for all five boroughs: Bowie himself dubbed it “The New York Marathon Tour” on BowieNet, stating: “I would like to repay the fans that traveled so far to see me by bringing my show to them. But most importantly, I could get home from all the gigs on roller skates.” He would play at the Music Hall at Snug Harbor (Staten Island); St. Ann’s Warehouse, alongside the Brooklyn Bridge; Queens College; Jimmy’s Bronx Cafe; and the Beacon Theatre. He also did a solid job shaking up the setlist from night to night. It’s hard to call a clear winner, but we’ll go with Brooklyn, which got everything from “Moonage Daydream” to “The Bewlay Brothers” to “Ashes to Ashes,” making the St. Ann’s show something special indeed.

The show opened with the first two songs on Heathen, the slow and atmospheric “Sunday,” and his energetic cover of the Pixies’ college rock classic, “Cactus.” Behind the 7-piece band (three guitarists, a bassist, a keyboardist, a drummer and a backing vocalist/percussionist) was the only remnant of the extravagant stage sets that the icon is known for: large lights spelling out the word “BOWIE.” While the icon himself was decked out in jeans and what he called his “leather jacket from the 80s,” several members of his band were wearing loud, colorful and rather comical pairs of pants. Apparently working with someone as notorious for their fashion choices as Bowie has rubbed off on his band, even if he, himself, doesn’t take those risks anymore.

The first “classic” track brought out was “Breaking Glass,” from 1977’s somber Low, which was followed immediately by the decidedly flamboyant, and considerably more familiar, “Fame,” which sounded more like its original version than one might have expected. Up next was “Slip Away,” from Heathen, which sounds like a sort of ode to New York but which Bowie clarified was actually an ode to former New York children’s entertainer Uncle Floyd. In addition to the expected banter about the city that included an attempt at speaking in deepest Queens dialect, Bowie made obscure references to Joseph Lenin and Simone de Beauvoir.

The show really got going near the midway point during favorites like “China Girl,” “Starman” and “Changes.” Also interesting was a more dramatic, pop-friendly version of the classic rock anthem, “Rebel, Rebel,” which preceded what was, surprisingly, the night’s best executed and most intense-sounding track; the heavy, industrial-flavored “I’m Afraid of Americans,” from 1997’s Earthling. Also amusing was the forgotten nugget, “Fashion” from 1980’s Scary Monsters (and Super Creeps), which found Bowie approximating a turn on the runway.

Review By Jesse Serwer
A lively encore was hinted at even before it started, as the initial set closed with the rather somber pair of “Heroes,” and “Heathen (The Rays).” After no more than a minute offstage, the eight performers re-emerged with the third cover of the night (the other two being “Cactus,” and Neil Young’s “I’ve Been Waiting For You”), “White Light, White Heat,” by David’s NY pals, the Velvet Underground. A re-vamped version of Bowie’s last major hit, 1983’s “Let’s Dance,” preceded the night’s true closing tracks, “Hallo Spaceboy” and, of course, “Ziggy Stardust.”