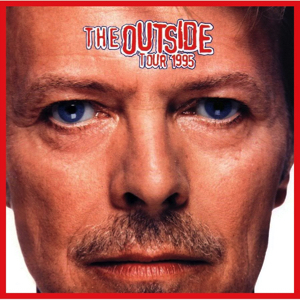 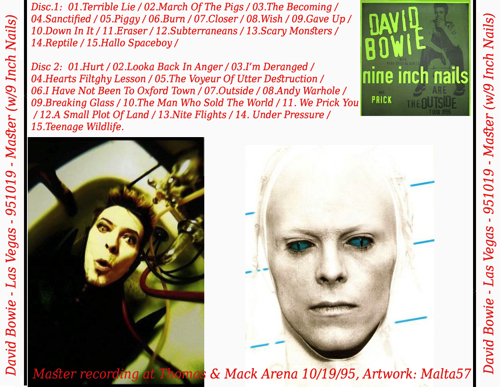 SONIC FLASHBACK: DAVID BOWIE WITH NINE INCH NAILS (OCTOBER 19, 1995 AT THOMAS & MACK)
The news of David Bowie and Nine Inch Nails touring on the same bill in 1995 was met with the kind of anticipation you’d expect, especially when word came that part of the show would involve them performing together. The concept represented the merging of a performer whose name had become synonymous with the ability to assume different personas, with a band that had become important by delivering its own brand of powerful drama, visually and aurally. It was a brave pairing of huge artists bridging two very different generations.

I had also thought of it in terms of a changing of the guard, with Bowie having slowed the frequency of his tours while Nine Inch Nails’ popularity was still surging. Just as those transitions had taken many years, the concert at the Thomas & Mack had its own gradual evolution, with NIN taking the stage first. The openers blasted through a mini-retrospective of the first three records, as Trent Reznor pled, writhed and punched the air. As the show unfolded it was hard to imagine how Bowie would meld with the dark intensity of a fog-filled, strobe-flickering arena reverberating with “Closer.”

I had only seen Bowie once before, at the 1983 US Festival with an exhausted audience of more than 100,000, so even a second-tier seat at the T&M was intimate by comparison. As NIN wrapped up its set, I couldn’t believe my ears as tones shifted to those of “Subterraneans” from Bowie’s haunting Low album. Wearing a stylish trench coat, he walked out with NIN still onstage, starting a gradual changeover of musicians between the two bands, barely noticeable because of the smoke machines.

The big moment proved well worth the wait. Bowie and Reznor traded vocals on each other’s songs—“Scary Monsters (and Super Creeps),” “Reptile” and newer Bowie song “Hallo Spaceboy,” as the moshing came to a stop with all eyes forward. The joint set ended with Reznor, Bowie and guitarists Carlos Alomar and Reeves Gabrels delivering a stunning “Hurt.” A smooth lyrical trade-off evolved and intensified into a mesmerizing duet that proved to be the single most memorable moment of the evening.

Bowie and his band followed with mostly newer material and none of his major hits, though he did include a few vintage album tracks and an encore of “Under Pressure.” Moshers moved away from the stage en masse as soon as the Bowie/Reznor set ended, as middle-aged Bowie fans shuffled down to take their spots—a sort of low-level reverse changing of the guard.

Did David Bowie Ever Play Las Vegas?
He did, three times by most accounts. In early 2004, an energetic 57-year-old Bowie performed two shows at the original, intimate Joint at the Hard Rock Hotel while on his A Reality Tour. The tour ended on July 23 of that year, and though fans hardly expected it, it would sadly become his last. Bowie essentially disappeared for almost a decade after that, until releasing his penultimate The Next Day in 2013, and then, perhaps intentionally, unleashing Blackstar on January 8, his 69th birthday, just two days before his death. If you include his two albums with Tin Machine, that makes 27 studio gifts from an artist widely considered a genius. And a true artist Bowie was, using music and performance to twist mainstream perception while giving voice, hope and affinity to a multigenerational group of like-minded outsiders.

While I was not present at The Joint on Bowie’s A Reality Tour (I have no excuse, really), I was lucky/unlucky enough to see Bowie perform at the Thomas & Mack Center in 1995. Why I was lucky needs no explanation; Bowie was a spry 48 years old, and while his then-latest album, Outside, was a concept piece not best suited to an arena setup, Bowie did not hold back in offering the audience many favorites from his decades of recording. Unfortunately, Bowie was touring with Nine Inch Nails this time around, and—while having seen NIN nearly bring the roof down at the Huntridge Theater, I was all for it— the two co-headlined, swapping slots as opener/headliner every other show.

In Las Vegas, Bowie had the misfortune of opening, and to the arrogant and aggressive young NIN fans near the front, Bowie was an old goat delaying Trent Reznor’s return to a Las Vegas stage. Thus I, and thousands of others in the audience who understood what it meant to see David Bowie perform, cringed as water bottles and boos were unconscionably tossed at the Thin White Duke. It was one of the few times I was hurt and embarrassed by my city.

It wasn’t the only time. I also watched a similarly ignorant crowd boo seminal L.A. punk band X when they opened for Pearl Jam at the T&M. So as many mourn Bowie and celebrate what he brought to music, something to consider the next time a Vegas audience is rude to an “opening” band is that we may never be given the chance to redeem ourselves. RIP, David, and don’t hate Vegas too much