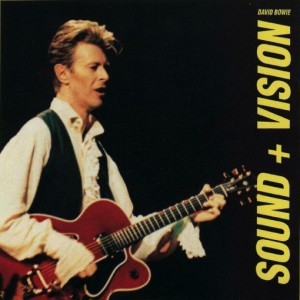 Most local memories of David Bowie concerts hearken to his Sound + Vision Tour in June 1990 at Star Lake Amphitheatre.

Bowie treated the sold-out Burgettstown crowd to a riveting, career-spanning performance that included some greatest hits he once had vowed to stop playing.

Backed by a four-piece band that included King Crimson guitarist Adrian Belew, and with visuals projected on one of the largest video screens concertgoers had seen up to that point, Bowie launched his set with “Space Oddity,” “Changes” and “Rebel Rebel;” included “Let’s Dance” and “Ziggy Stardust” near the middle; and encored with “Modern Love,” “Panic in Detroit” and “The Jean Genie,”

note : jojogunne
This will be relatively short & sweet because I wasn’t at the show & therefore did not record it. I got this tape directly from Mr. X, who shall remain nameless. There’s about a 95% chance that he also taped the concert but I don’t know for certain.
I used to trade tapes w/ X but he seemed to think it quite all right to give me incomplete shows for my complete shows so after a short time, I knocked that shit off. In taping, he also seemed not to care whether he got the complete concert or not.
For whatever idiotic reason, sadly the last 3 songs are missing from the recording. “Mastering” (cleaning up) this tape was a large pain in the ass. There were a bunch of stops and starts and pauses that had to be repaired to give a smooth listening experience.
Luckily, I’m becoming adept at using Magix Audio Cleaning Lab 2013 ; I used to use Cakewalk Pyro 2005 but it will not work in Windows 7.
Too bad b/c it was a great product and VERY easy to use. (I also can’t install Internet Explorer 11 on my fucking computer to save my soul but that’s a story for another time).
Anyway, it’s a really good-sounding show IMHO, especially since a cheap recorder/mic combo was probably used. There are no speed problems, no wow, flutter, distortion, etc. so I think that you Bowie fanatics will get a charge out of this recording.
AFAIK, this concert has never seen the light of day & SHOULD be completely uncirculated. It sounds like it was recorded very close to the stage as the vocals are clear & upfront. IF I am wrong & another (complete) version of this show exists.