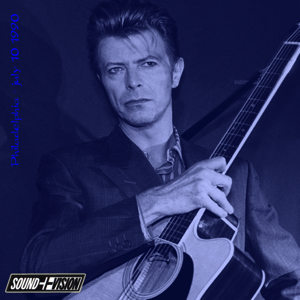 By Jonathan Takiff, Daily News Staff Writer
POSTED: July 10, 1990
When a show peaks in the very first number, you gotta figure that something’s not quite cricket.

It happened last night at the Spectrum, the first night (of four) of David Bowie’s “Sound and Vision” local stand.

The lights dimmed and the triumphant fanfare of Beethoven’s “Ode To Joy” rang out – recalling magic nights at the Tower, circa 1972, when Bowie’s “Ziggy Stardust” landed from space. The music also recalled the anarchistic nightmare of “A Clockwork Orange” that Bowie seemed to draw on for so much inspiration.

As his small band kicked into the opening of “Space Oddity,” a black- suited Bowie appeared in a spotlight, seen through a gauzy screen that stretched from stage floor almost to the Spectrum’s roof.

Giant black-and-white video images of Bowie then floated onto the screen, and also in mirror images on two circular side screens. Looming down on his mortal self, all the video personifications were singing in synchronization (or almost) with the live performer – realizing Bowie’s favorite vision of an otherworldly, gravity-free superman.

At that moment, the fusion of imagery, music and performance was transcendent, leaping backward and forward in time simultaneously. The presentation suggested that Bowie was really onto something special with this “Sound and Vision” show. While billed as a musical retrospective – to hype his newly reissued album catalog – Bowie’s notion has been to redo the numbers in a decidedly high-tech, modern package that will maintain his excitement and pop vanguard status.

The video-dominated “Sound and Vision” is even more in-your-face than MTV, and much more compelling than his last, overwrought “Glass Spiders” tour.

Several times, Bowie interplays seductively and/or comically with an on- screen, Amazon queen of a dancer, even doing the “Vogue” during “Fame.”

In “Life On Mars,” the exotic-looking creature on screen who’s throwing come-hither glances at Bowie turns out to be himself, in vintage “Hunky Dory” drag queen repose. What a goof!

This is one show where you’d do better to leave the binoculars at home. To zoom in just on the live star is to miss the big picture, to miss the star’s much larger-than-life alter-ego(s). It’s also not such a great idea to focus your aural senses sharply on Bowie’s vocals. Better to be distracted by the loud playing and backup vocals of Bowie’s group, led by show-boating guitarist Adrian Belew.

The bitter truth is that Bowie didn’t have much upper vocal register to show last night, after giving his all in that stunning opening number. Several times, he talked through the toughest notes, and he cut lots of numbers from the tentative set list – in the process shortening the show to 105 minutes

Sure, there were still plenty of oldies but goodies like “Rebel, Rebel,” a rushed-through (probably because he never really liked it) “Changes,” a show-stopping “Ziggy Stardust” (how dare he say he’ll never do it again?) and more contemporary stuff like “Let’s Dance” and “China Girl.”

And it was grand last night to hear Bowie getting all hokey, reminiscing fondly (and often) of past times spent here. Glorious nights in the Tower Theater spotlight, “blasted out of my brain,” he laughed, with young women baring their bodies from the front rows.

The hard-wired Philly days of 1975 that produced “Young Americans” were also recalled. This time, Bowie’s song of misplaced ideals and corrupt government was related to the harassment of 2 Live Crew. “Even if you don’t like their music, go buy the album,” Bowie exhorted. He may be the whitest man in rock, but he’s still got plenty of soul.

Expected but missing in action were the likes of “Panic In Detroit,” “Rock and Roll Suicide,” “Cracked Actor,” “Queen Bitch,” “TVC15” and “Fashion.” Perhaps Bowie has been counseled to pace himself for the long race. More likely, he’s just another of the hard-touring superstars to have lost it on the road this summer – joining the ranks of sore- throated Madonna, walking pneumonia victim Billy Joel, and a surprisingly thin and reedy sounding Paul McCartney. But that’s this coming weekend’s story.