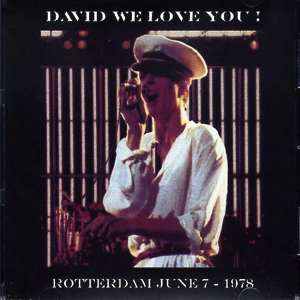 Bonus : Bremen TV (Not Broadcast)
24. What in The World .wav

Label : No label
Audio Source : audience
Lineage : off master
Taping Gear : Unknown
Taper: RDO
Recording Location: Unknown
Total running time : 1:52:43
Sound Quality : Not good ,much Noise ,very dull
Attendance : 7.500
Artwork : back side Covers Not Yet Available ? , who can help me with this .?
Info : track 24 Wath In The World
Bowie performs ‘What In the World’ live At The Beat Club (Musikladen) on 30th May 1978. After the transmitted show which ended with ‘Rebel Rebel’ the band played on. This is an outtake which was the next song after ‘Rebel Rebel’

massive yelling of the audience: (by Pim)
The concert began and I(Pim) was much impressed by the massive yelling of the audience. When Carlos Alomar,standing mid-stage started directing the band,a woman behind me,thinking he was Bowie,uttered her astonishment to her neighbour: “Look Bowie, has dressed up as a negro!”. many people loved every minute of the concert,right from the very beginning,and I was quite overcome the enormous neon case which was lit for the first time during Jean Genie – what a spectacle! At the end of Ziggy Stardust bunch of roses was thrown onto the stage; singing Bowie piccked out a rose and he ended the song drawing out “Now Ziggy played … guitar!!”,his arms stretched out,caught in two bands of light.
During Art Decade coloured lights swept across tho audience lighting up masses of waving people. Bowie waved back with passion.

I was thrilled by Moon of Alabama,and so were many others girl behind me burst into tears and wept on her neighbour’s shoulders.
Station to Station began and Adrian Belew set in his lengthy solo. He went about it so wildly that it was potively comical; even Bowie ,who w as leaning on the piano almost rolled over withh laughter, At the quickening in “Once there were mountains .. ,” hell broke loose. A boy jumped from his seat on the platform and ran towards the stage in a franzy. This was the signal for people all around the hall to get get up and follow his suit in a tremendous run on the stage ! Bowie kept on singing :he laughed ,yet ,to be quite on the safe side ,kept his distance. Ever more people started jumping on their seats, This certainly was the climax of the concert.

Station to Station ended,and Bowie and the band left the stage. The audience were stamping their feet,clapping and shouting for an encore to a man; thousands o[ cigarette lighters were lit,presenting a wonderful spectacle. Presently they returned to give some splendid versions of Stay and TVC-15, Bowie danced a great deal,while the audience kept their end up and turned the whole place into a carnival.
Once again Bowie and the band left the stage,but I was certain they would be back. I was right: the second extra was an immensely swing­ing version of Rebel Rebel ,with Bowie dressed in a snake jacket,and the audience singing along en masse – but then it was really over. The lights went on and ‘The Ahoy’ emptied. The concert had really gone to my heart – from then on I became a genuine Bowie-freak. Enraptured I was Floating towards the exit,already filled with hopes that he might be back soon.
Thank you Pim Jal de la Parra +
Elly de Waard wrote: “In the gangway people were embracing eachother spontanequsly. The audience leaving the sports hall are a HAPPY audience”. And that is exactly what they were.