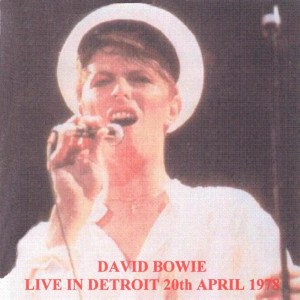 Very good concert ,trough the audience are unruly and quite violet .objects are constanly being hurled at the stage and when during ZIGGY STARDUST Bowie sees people coming to blows he bursts into a rage .schouting:
”HOLD IT !,YOU !,HOLD IT !. THAT IS NOT NECESSARY .TOO MANY FUCKING PEOPLE IN FUCKING PLACES LIKE THIS. DON’T DO IT !”
If the audience weren’t in hysterics yes ,the are so now.
Bowie continues with SUFRAGETTE CITY ,PANICK IN DETROIT would have been more appropriate).
Probably it was due to this accident that Bowie didn’t feel like returning to the stage for his second extra,Rebbel rebel

A real good show,
Bowie sings very well and the numbers are excellently played.
The tape also contains part of the announcer’s words: “So please take your seats and enjoy the show”.
After the band intro Bowie says: “Here’s a character I wrote a long time ago – here are some songs from Ziggy Stardust“. The audience can’t believe their ears and are hysterical. A trifle too hysterical: the stage was permanently strewn with projec­ tiles and on the whole there was quite a lot of violence.

During Ziggy Stardust: fights break out right at the foot of the stage. Bowie can’t bear the sight of it and breaks the act; he cuts up rough: “Hold it! You. Hold it! That is not necessary. Too Many fucking people in fucking places like this this! Don’t do it!”. The audience scream even louder,there is quite a panicky atmosphere. Bowie proceeds with Suffragette City, al though Panic in Detroit would’ have been more to the point! The show goes on in a lovely version of Rock & Roll Suicide,but the audience still won’t quiet down and all the time Bowie is obliged to dodge objects that come flying at him. Before Art Decade he says: “These two next songs take place in Berlin. The first one was written by me and the se­cond one was written by Bertolt Brecht/Weil in 1924”. Rebel Rebel is not on the tape. It is possible that Bowie did play it,but that it is just missing from the tape,though I rather think he did not play it at all,simply because he didn’t feel like it with all the violence around. Who would blame him?