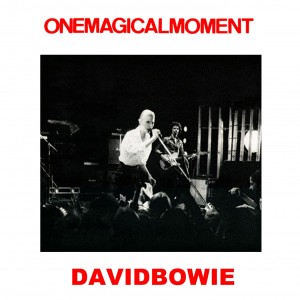 This is a good concert and Bowie does a great deal of talking. During Waiting For the Man Bowie points at Stacy Heydon,saying “Do you know what he said to me? ‘Yeah my buddy,my home town’ – Stacy Heydon!”, The audience cheer,and laughing Bowie sings on,not at all in character with The Thin White Duke!
The audience are wildly enthusiastic about the solo part Dennis Davis play’s in Panic In Detroit: and after this song Bowie introduces the band. And himself: “This song is called Changes,and my name is David Bowie,good evening”.
After Diamond Dogs Bowie cries out “Thank you very much,good goodnight” and when he returns for Rebel Rebel he waits an aw­fully long time before starting to sing. “It was called .. ,uhm, what’s it called. What’s it called?” Bowie asks,and it is not until after the band have sung “Rebel rebel“ in reply that Bowie starts singing.
At the beginning of The Jean Genie Bowie talks to the audience again: the band have just struck up the song,when Bowie asks:
“Would you like me to tell you about Jean Genie?”. Bowie and the band turn this into quite a hard-boiled version, and just when the band have produced the final tones Bowie says: “Hold it,hold it. Now,someone has thrown me a book that I’ve been trying to get for a long time. Just for that we’ll do some number that we don’t ever do. (cheering.) This is a song that I’ve written with a friend of mine called Iggy Pop,and he’s bringing it out as his record this year some time,and it’s called Sister Midnight and it’s for you tonight”. Sister Mid­night was often played during the US tour,but this is one of the few tapes that have it. Lots of fine guitar work! Immedi­ately after this song,part of Jean Genie again,preceded by Bowie calling out in rapid sequence “Monday,Tuesday,Wednesday, Thursday,Friday,Saturday,Sunday night!”.