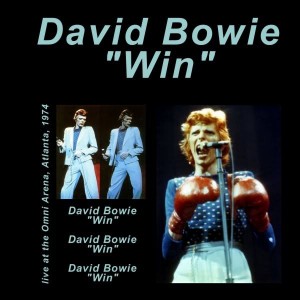 The only live version of the song “Win”

Bowie famously played “Win” during this show on December 1, 1974 in Atlanta, which I’ve posted seperately. This recording furhter only includes “Young Americans” from the actual “Young Americans”-album, which wouldn’t be released until the following year. But he also played “Footstompin’ “, whose riff would be used for the later addition “Fame