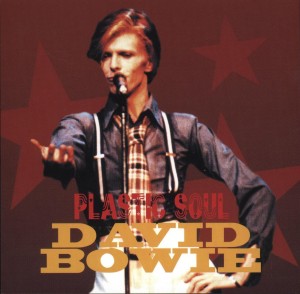 This is an excellent audience recording of the late 1974 Soul Tour, possibly THE Best recording of this leg lots of audible detail from every instrument.
however apart from excellent tight grooving versions of Sorrow, Rebel Rebel & Changes – the last 2 being very like the superior Station To Station Tour, this rock fan feels David is journeying up a musical blind alley that leaves him sounding like a retro nostalgia act. Earl Slick was getting impatient and this reviewer can see his point.
Things are redeemed somewhat with The Jean Genie where slick can let loose, Moonage Daydream follows but its very soulified , the worst of the tour, vastly inferior to Madison University or Radio City Music Hall. Earl Slick provides a great solo but the effect is of a Lion roaring in captivity, the song ends in a confused mess.
a couple of soul songs then Suffragette city is murdered, Earl Slicks guitar is mixed ridiculously low and the song is smothered by awful over the top backing vocals of the coked-up shouting variety, for a second it seems like slick is breaking through but the fader is soon yanked down again.
the “tedious psychodrama of Rock ‘n’Roll Suicide” – to quote a newspaper review of the tour follows and David does the vocal equivalent of “Blacking-up” – cringeworthy, embarrasing and borderline offensive.
Diamond Dogs follows and the sound mixers hand on Earl Slicks fader is relaxed a little but not enough. theres more saxophone than we’ve ever heard on this song, but I must acknowledge that the audience clearly love what they are hearing “see you tommorow!” says Bowie and thats it.