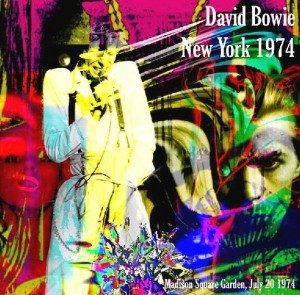 The final show of the Diamond Dogs tour:
Ziggy Stardust was dead, and when Bowie returned to town for his first performances at the Garden, it was with the insanely ambitious Diamond Dogs tour, which featured a full theatrical set (including a catwalk and a cherry picker hoisting Bowie over the audience) and choreography (by none other than Toni Basil). Diamond Dogs was meant to be Bowie’s vision of Orwell’s 1984, having come about after his attempts to create a musical based on the book were blocked by the author’s widow. But Bowie’s own post-apocalyptic creation was plenty bleak on its own. These MSG shows — the final concerts on this leg — were filmed by Bowie’s management for release, but although audio is out there, the video has never surfaced.

Same as Toronto ,but Drive in Saturday Bowie replaces by Knock on Wood;
This is the last concert of the tour, performed in this sold out Madison Square Garden. The two con­certs had originally been planned for Radio City Music Hall, but because of the overwhelming demand for tickets they had been moved to the Garden which is three times as big. For Bowie it was an important thing that these two concerts were booked up,because it placed him on a level with a couple of other very popular artists. The amount of money grossed for both shows was $260 and both shows were videotaped. “Good evening New York!” Bowie cries before All the Young Dudes, and the enthusiastic audience respond by cheering. “Thank you,we are pleased to be here. This is a song I wrote for some friends of mine called Mott the Hoople”.
This is a great con­cert,and a great tape. Earl Slick’s guitar dominates and at places it drowns the other instruments,but this sounds rather good,actually. Slick plays beautifully and songs like Sweet Thing,Time and Panic in Detroit are performed to perfection. After Rock & Roll Suicide “Thank You” Bowie Says: