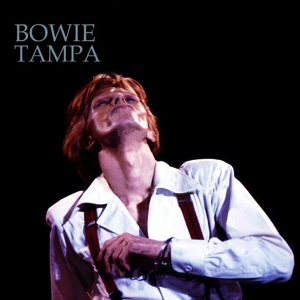 The driver or one of the lorries containing the scenery,lighting equipment,etc. ,got stung by a bee and so the lorry ended up in a swamp.
Before the concert starts the announcer says: “Good evening. Good evening ladies and gentlemen.
The concert you’re going to see tonight is not the show we had planned for you. Due to an unfortunate road accident, half of our stage scenery, costumes, lighting equipment is in a local swamp fifteen miles north of here.“Oh my god” cry the audience.“There was talk of cancelling tonight’s performance but David Bowie would not hear of it and insisted we go on in the remaining half condition. So, in a few minutes we’ll go on with the concert – thank you”

Before All the Young Dudes Bowie says: “Good evening Tampa. Well,we thought it wasn’t gonna happen,because as you probably heard we had a bad road accident and we’re still upset about it,but l’d like to thank you for being here”.
With or without scenery,Bowie made it into a great concert,and after a stand-up ovation which lasted twenty minutes,he even played an extra,the only one of the whole tour. However,this extra is not included in this tape and which number it was is unknown to me. This is a ter­rific tape and quality-wise it is the best of 1974.(?) 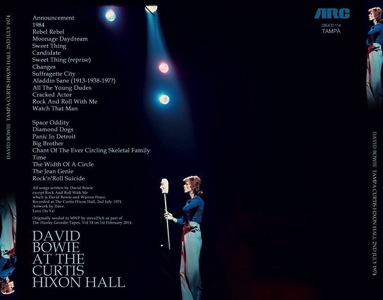 The announcement was bookeneded by some gaps, which I removed and tidied.
Some volume reprofiling throughout.
Gap in Changes at 2:25-26 – Let’s Dance repair from earlier reprise.
Abrupt join between Cracked Actor and Rock’n’Roll With Me is on the source tape.
Tape flip between Rock’n’Roll With Me and Watch That Man, also shows signs of old join. Fade-out/in to tidy.
Blip in Watch That Man @ 2:07 (checked three versions, all the same) – fade-out/in to tidy.
Set break between Watch That Man and Spade Oddity. Faded out fully.
Noise blip (not 100% sure it’s anything to do with the concert) @ 4 seconds in Time. Removed – loss of a beat.