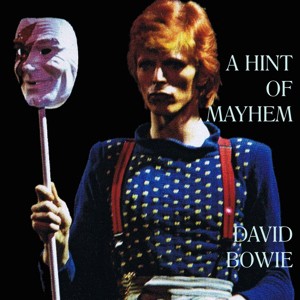 Bowie had laryngitis that evening, but there are few indications of this in his performance. (Note that during “Aladdin Sane” he tries to avoid the high notes that gave him some problems during the early show.) 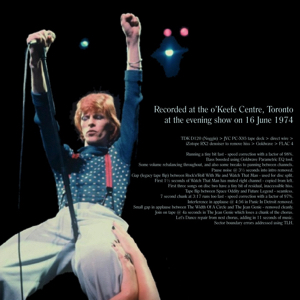 Photos courtesy of Pete Post ,thanks Pete for the use

review BRAD WHEELER – The Globe and Mail
June 16, 1974, at O’Keefe Centre (first of two shows):
“The most spectacular rock show I have ever seen,” crowed The Globe’s Robert Martin, who has seen a few. Mr. Bowie sang Big Brother from what looked to be a space capsule. For Space Oddity , he played the doomed Major Tom swung out from a tower on a cantilevered chair on a hydraulic boom. Virtually all of the songs in the 20-song set were, according to the reviewer, “mini-drama, three-to-five-minute stories told in song, dance, mime and special effect.”

notes
Running a tiny bit fast – speed correction with a factor of 98%.
Bass boosted using Goldwave Parametric EQ tool.
Some volume rebalancing throughout, and also some tweaks to panning between channels.
Pause noise @ 3Ω seconds into intro removed.
Gap (legacy tape flip) between Rock’n’Roll With Me and Watch That Man – used for disc split.
First 1Ω seconds of Watch That Man has muted right channel – copied from left.
First three songs on disc two have a tiny bit of residual, inaccessible hiss.
Tape flip between Space Oddity and Future Legend – seamless.
7 second chunk at 3:17 runs too fast – speed correction with a factor of 97%.
Interference in applause @ 4:56 in Panic In Detroit removed.
Small gap in applause between The Width Of A Circle and The Jean Genie – removed cleanly.
Join on tape @ 4a seconds in The Jean Genie which loses a chunk of the chorus. Let’s Dance repair from next chorus, adding in 11 seconds of music.
Sector boundary errors resolved using TLH.