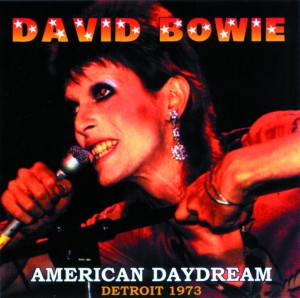 A fine concert,but very short,with Bowie introducing the new numbers. In his book Fletcher writes that before Panic in Detroit Bowie says “This one is particulary pertinent to this city,it’s called Panic in Det~oit”,which is incorrect. He just says “This one’s called Panic in Detroit“. Aladdin Sane is introduced with the words “This is the title track from the album,it’s called Aladdin Sane“. “Thank you Detroit!” Bowie calls out to the enthusiastic audience after Rock & Roll Sui­cide.

In a Rolling Stone interview with William S. Burroughs i 2001, David Bowie expanded on the Ziggy Stardust story:

“The time is five years to go before the end of the earth. It has been announced that the world will end because of lack of natural resources. Ziggy is in a position where all the kids have access to things that they thought they wanted. The older people have lost all touch with reality and the kids are left on their own to plunder anything. Ziggy was in a rock-and-roll band and the kids no longer want rock-and-roll. There’s no electricity to play it. Ziggy’s adviser tells him to collect news and sing it, ’cause there is no news. So Ziggy does this and there is terrible news. ‘All the young dudes’ is a song about this news. It’s no hymn to the youth as people thought. It is completely the opposite. […]
The end comes when the infinites arrive. They really are a black hole, but I’ve made them people because it would be very hard to explain a black hole on stage. […]
Ziggy is advised in a dream by the infinites to write the coming of a Starman, so he writes ‘Starman’, which is the first news of hope that the people have heard. So they latch onto it immediately…The starmen that he is talking about are called the infinites, and they are black-hole jumpers. Ziggy has been talking about this amazing spaceman who will be coming down to save the earth. They arrive somewhere in Greenwich Village. They don’t have a care in the world and are of no possible use to us. They just happened to stumble into our universe by black hole jumping. Their whole life is travelling from universe to universe. In the stage show, one of them resembles Brando, another one is a Black New Yorker. I even have one called Queenie, the Infinite Fox…Now Ziggy starts to believe in all this himself and thinks himself a prophet of the future starmen. He takes himself up to the incredible spiritual heights and is kept alive by his disciples. When the infinites arrive, they take bits of Ziggy to make them real because in their original state they are anti-matter and cannot exist in our world. And they tear him to pieces on stage during the song ‘Rock ‘n’ roll suicide’. As soon as Ziggy dies on stage the infinites take his elements and make themselves visible.”