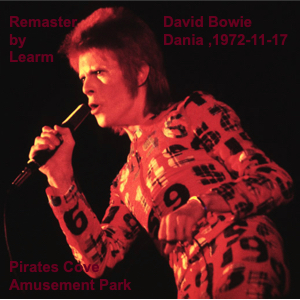 Other remarks:
– this version for me is by far the best sounding version of the concert I know of (I had 4 versions from Steveboy for comparison + my own one)
– There is some hiss present but I decided to leave it that way in order not to remove too much of high frequencies
– Some seconds in the middle of Width Of A Circle missing due to tape flip
– From all versions I know of this concert part 2 (starting with the 2nd part of Width Of A Circle) has an
inferior sound, manifested by a lack of higher frequencies. But in this version this is much less present
– The second half of Space Oddity is getting inferior in sound and was EQ’ed separately (treble lifted). This is the same in all versions

For me this is now one of the best sounding audience recordings from 72. But make up your own mind (song samples attached). The only flaws are some cuts, mainly minor ones but a more mattering one in the middle of Width Of A Circle and the sound differences during the concert. But all in all this doesn’t really matter when listening to the recording.