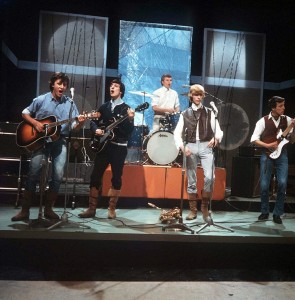 “Liza Jane” was the first recording to be released as a single by David Bowie, but under the name Davie Jones with the King Bees. This event took place in 1964 when Bowie was 17 years old. The B-side of the single was the Paul Revere and the Raiders song “Louie, Louie Go Home”. Both songs on the single were recorded in a seven-hour session at Decca Studios in Broadhurst Gardens, West Hampstead

Bowie came in touch with Leslie Conn, who ran Doris Day’s music publishing company and was a talent scout for the Dick James Organisation. Conn booked The King Bees for a wedding anniversary party, but with loud RnB on the setlist, Conn stopped the gig after only 10 minutes. Conn still became The King Bees’ manager and promoter for some months in 1964, and they recorded and released “Liza Jane” as a single for the Decca Records label Vocalion Pop.Despite promoting the single on the television shows Juke Box Jury, Ready Steady Go! and The Beat Room, and receiving good radio coverage, the single sold poorly and the band were subsequently dropped from the label.

The song was an arrangement of the old standard “Li’l Liza Jane”, but Conn was credited as the songwriter, and the usual story is that this was done to get more royalties from the single. Conn recalled in 1997 how the King Bees had come up with a six bar blues, which everyone used. Conn came up with some ideas of his own for the song, they improvised and the song came together.

After Conn and Bowie parted in 1964, Conn moved to Majorca for a few years, and was one day on the phone with his mother who wanted to get rid of a few hundred copies of “Liza Jane” that were stored in her garage. They agreed to throw them away.

Bowie recorded the song again, in 2000, for the album Toy, which was never officially released but eventually leaked on the Internet in 2011.

Artist Biography by Richie Unterberger
The first record David Bowie made was as lead singer of Davie Jones & the King Bees on the single “Liza Jane”/”Louie Louie Go Home,” which came out in June 1964. Bowie was still going by his first name of David Jones at this point, and playing Rolling Stones-styled R&B-rock with the King Bees. Their sound was very much in the rough sub-Stones strata inhabited by too many groups to count in 1964, with a repertoire full of staples like “Hoochie Coochie Man” and “Got My Mojo Working.” A press release of the time listed Bowie’s favorite vocalists as Little Richard, Bob Dylan, and John Lee Hooker. The music was a long way from what Bowie would become famous for in the ’70s, and a good deal less original.

Nonetheless, Davie Jones & the King Bees attracted the interest of manager Leslie Conn, who producing their first single and arranged for it to come out on the Decca subsidiary Vocalion. The A-side was a rearrangement of the black spiritual “Liza Jane,” for which Conn took the songwriting credits. Although shunned as worthless by some Bowie biographers, it wasn’t a bad British R&B effort, brash if typical and derivative. Bowie played sang and played saxophone, an instrument he would rarely return to in his lengthy career. The B-side, a cover of the obscure Paul Revere song “Louie Louie Go Home,” was lousy, and one of the worst things Bowie ever issued on disc.

The single didn’t go anywhere, and soon after its release, Bowie left the King Bees, moving on to his next group, the Manish Boys. “Liza Jane”/”Louie Louie Go Home,” an extremely rare and valuable single for years, eventually got reissued on several occasions, and is most readily available on Rhino’s compilation of early David Bowie material, Early On (1964-1966). The only member of the King Bees to play a role in Bowie’s post-King Bees activities was rhythm guitarist and harmonica player George Underwood, a childhood friend who did the painting of Bowie that appeared on the back of the 1969 David Bowie album, and worked for the singer’s management company, Mainman, as a designer and graphic artist.