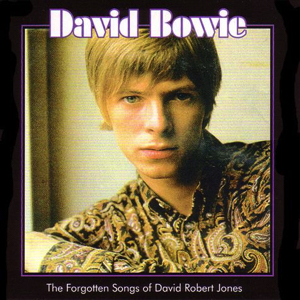 An excellent collection of 1960’s demos, previously available only through lousy quality bootlegs. It is not clear if this is a bootleg or not, actually, since it’s been available through many retailers that don’t sell bootlegs (like Amazon.com or CD Universe). Sound quality is -reportedly- excellent compared to any previous boot releases.

Though this might well be an unauthorized compilation, it’s certainly packaged as professionally as any legit release, right down to the UPC code on the back, which means that you may well find this in stores that don’t usually carry bootlegs. If you have any interest in Bowie’s ’60s roots, it’s an essential purchase, collecting much pre-“Space Oddity” material of note that doesn’t appear on the Rhino’s Early On and the various Deram reissues. There are acetates from circa 1966-67, including an earlier, far more rock-oriented version of “Silly Boy Blue,” and the acoustic “Over the Wall,” and the first true flowering of his camp-theatrical persona. There are also demos/alternates of songs that appeared on his early Deram recordings, a creepy demo of “When I Live My Dream” with funeral parlor organ, and a piano-driven, cheery music-hall take of “London Bye Ta Ta.” Three unreleased demos from 1968 would never surface in any official versions, and show Bowie in more of a singer-songwriter mode than he would usually favor in the future. Much of the material from ’69-70 has surfaced on various bootlegs, like a version of “I’m Waiting for the Man,” the masochistic “Little Toy Soldier,” and a couple of cuts from a frequently booted late ’60s acoustic demo session. But it’s good to have it integrated into a sensibly sequenced compilation, and “Lover to the Dawn,” a song from the late acoustic ’60s demo session that usually doesn’t appear on bootlegs of that tape, is a welcome bonus. With running time of 70 minutes and good-to-superb sound, it’s exceptional value for a “gray area” release.