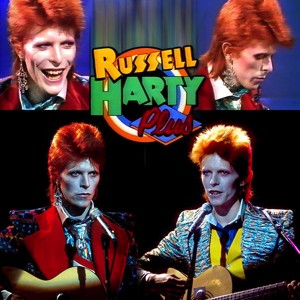 For the first time, a complete recording of Russell Harty Plus, including a 12 minute interview. The program was recorded by holding a portable cassette recorder in front of the TV. This is a direct digital copy of the master tape. Understandably, the sound quality isn’t very good for today’s standards, but it has been cleaned from noise and tape drone. As long as the BBC will not repeat the program, this surely is the best source for My Death. Enjoy.

Generally agreed to have been taped on January 17 1973 (while The Jean Genie was at its peak of #2 on the official UK singles chart), there is some confusion as to when the actual broadcast of David Bowie on Russell Harty Plus took place.
We’re going with today’s date (which was a Saturday and in keeping with other broadcast dates of RHP), unless one of you out there has some other definite proof of broadcast, such as a TV listing magazine. (It worked last time we asked)
The original show which included Drive-In Saturday, the Bowie/Harty interview and a solo performance of My Death, was wiped by LWT.
A partial repeat on Russell Harty Plus Pop rescued the first song and much of the interview, but sadly My Death and the full interview survive as audio only.
If you’ve never seen it, it’s an absolute treat to look back at the 26-year-old Bowie, nervous in interview but peacock proud in performance for his first ever chat show appearance.
Our montage shows two stills from the interview plus pictures from the broadcast version of My Death (bottom left) and the rehearsal of My Death (bottom right)
Check out the surviving footage and audio on YouTube.