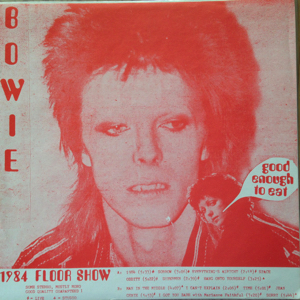 For a long time I thought that this disc was available on blue vinyl only, but now I know that it was pressed on black vinyl too. There should even exist a small number of TAKRL discs, complete with the printed TAKRL labels, released with this insert! Another label used together with this insert is GREAT LIVE CONCERT, but I think that they are the same as the RUTHLESS RHYMES discs, only with different labels? What a mess, but still a nice issue! Same as the LP DOLLARS IN DRAG (1974). 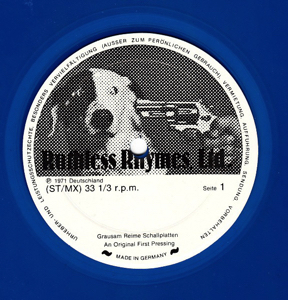 Notes
“1984” contains the track “Dodo”, but track title does not appear on release. Album includes gimmicks and voice overs between the tracks, including an advert for Hires, America’s favorite root beer (first track side 2), a portion of the Marx Brothers “Everyone Says I Love You” from the movie ‘Horse Feathers’, track includes the part with Groucho Marx singing (track after “Time”).

Track list is different to the actual TV broadcast track list, as the “NBC Midnight Special: The 1980 Floor Show” was filmed over three days and selected tracks over this period were collected for an one hour TV broadcast at a slightly later date. “Supermen”, “Hang On To Yourself” and “Man In The Middle” were not broadcast during the NBC American special, although they are included on this bootleg. This version of “Supermen” is different to that on “The Man Who Sold The World” and is a lift from the triple album “Glastonbury Fayre”.

‎”The 1980 Floor Show was filmed over three days and selected tracks over this period were collected for an one hour TV broadcast at a slightly later date. Superman, Hang Onto Yourself and Man In The Middle were not broadcast during the NBC American special, although they are included on this bootleg.

***
From reviews:
“After a couple of prompts here and there I decided to listen to ‘Dollars’ for the first time in ages. Listening to this again was like meeting up with an old friend.A huge bear hug was the order of the day! This,along with Ziggy’s Last Stand and All American Bowie were the first bootlegs i ever bought. A classic in its own right Dollars came in plain white card sleeve,a paper insert for a sleeve with a plain blank label. It was fear and intrepidation, you pays your money and take a chance. I wasn’t to be disappointed. Dollars was made up of material from Bowie’s 1980 Floor Show and three songs from his Arnold Corns period ,Hang On To Yourself,The Supermen and Man In The Middle.
Does anyone remember the little gimmicks and voice overs between the tracks? Well this album had the lot, from someone walking on a pebbled beach, to Groucho Marx singing ‘Ugly Duckling’ and even some college girls having a chit chat! “
‎Bassman states: “The first issue of this disc has two inserts, one on the front side and one on the back side. The one on the back side features an article called “David Bowie’s Make Up Do’s And Dont’s”. Because of this, the first edition is often called MAKE UP DO’S AND DONT’S. The first issue has printed TAKRL labels. The second issue has only the front insert, and mock labels. The third issue came in a b&w printed cover, and has no printed labels. THE SUPERMEN is from the compilation LP “GLASTONBURY FAYRE”, and is a version recorded specially for that album. HANG ON TO YOURSELF and MAN IN THE MIDDLE are both official Arnold Corns versions.
By the way, the back side of all the printed TAKRL is the same, except for SOFT IN THE MIDDLE (1974) and THE 1972 AMERICAN TOUR (1978).”
I did not find a good quality image of the back insert but I did find the original article: