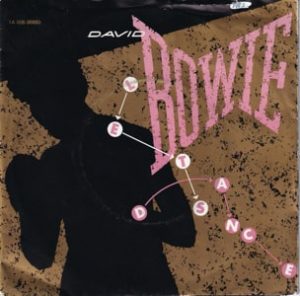 “Let’s Dance” was released as the first single from that album Let’s Dance in 1983, and went on to become one of his biggest-selling tracks. Stevie Ray Vaughan played the guitar solo at the end of the song.

The single was one of Bowie’s fastest selling to date, entering the UK Singles Chart at number five on its first week of release, staying at the top of the charts for three weeks. Soon afterwards, the single topped the Billboard Hot 100, becoming Bowie’s second and last single to reach number 1 in the U.S. In Oceania, it narrowly missed topping the Australian charts, peaking at number two, but peaked at number one for 4 consecutive weeks in New Zealand. The single became one of the best selling of the year across North America, Central Europe and Oceania.

Music video
The music video was made in March 1983 by David Mallet on location in Australia including a bar in Carinda in New South Wales and the Warrumbungle National Park near Coonabarabran. In the beginning it featured Bowie with a double bass player inside the one-room pub at the Carinda Hotel and an Aboriginal couple ‘naturally’ dancing “to the song they’re playin’ on the radio”, The couple in this scene and in the whole video is played by Terry Roberts and Joelene King, two students from Sydney’s Aboriginal Islander Dance Theatre. As Bowie opted for real people, some residents of the 194-souls village of Carinda are in the pub too, watching and mocking at the couple. They do not believe who David is nor what the take is all about, hence their behaviour towards the couple as seen in the video is real.

The red shoes mentioned in the song’s lyrics appear in several contexts. The couple wanders solemnly through the outback with some other Aboriginals, when the young woman finds a pair of mystical red pumps on a desert mountain and instantly learns to dance. Bowie’s calling ‘put on your red shoes’ recalls Hans Christian Andersen’s tale “The Red Shoes”, in which the little girl was vainly tempted to wear the shoes only to find they could not been removed, separating her from God’s grace – “let’s dance for fear your grace should fall” “The red shoes are a found symbol. They are the simplicity of the capitalist society and sort of striving for success – black music is all about ‘Put on your red shoes'”, as Bowie confirmed.

Soon, the couple is visiting museums, enjoying candlelit dinners, and casually dropping credit cards, drunk on modernity and consumerism. During a stroll through an arcade of shops, the couple spots the same pair of red pumps for sale in a window display, their personal key to joy and freedom. They toss away the magic kicks in revulsion, stomping them into the dust, and return to the mountains, taking one final look at the city they’ve left behind.

Bowie described this video (and the video for his subsequent single, “China Girl”) as “very simple, very direct” statements against racism and oppression, but also a very direct statement about integration of one culture with another. He inserted numerous references to the Stolen Generations. For example, the scene where the young woman scrubs the street on her knees in the middle of a busy street refers to Aboriginal children that were trained as domestic servants before being sent to white homes.

Reception and legacy
“Let’s Dance” was described by Ed Power in the Irish Examiner as “a decent chunk of funk-rock”. Writing for the BBC, David Quantick said “the combination of Bowie and Rodgers on the title track was perfect – Bowie’s epic lyric about dancing under ‘serious moonlight’ and the brilliant filching of the crescendo ‘ahh!’s from the Beatles’ version of the Isley Brothers’ ‘Twist and Shout’ were masterstrokes, each welded to a loud, stadium-ised drum and bass sound”.

The song introduced Bowie to a new, younger audience oblivious to his former career in the 1970s. Although the track was his most popular to date, its very success had the incongruous effect of distancing Bowie from his new fans, with Bowie saying he did not know who they were or what they wanted. His next two albums, made as an attempt to cater to his new-found audience, suffered creatively as a result and Bowie cited them as the albums he was least satisfied with in his career.

Live performances
The track was a regular on the Serious Moonlight Tour (the name derived from a lyric in “Let’s Dance”), and was released on the 1983 concert video Serious Moonlight. The song was also performed live on Bowie’s 1987 Glass Spider Tour (and released on 1988’s Glass Spider), and on his 1990 Sound+Vision Tour, and it was then reworked semi-acoustically for tours in 2000 and later. A live recording from 27 June 2000 was released on BBC Radio Theatre, London, June 27, 2000, a bonus disc accompanying the first release of Bowie at the Beeb in 2000.