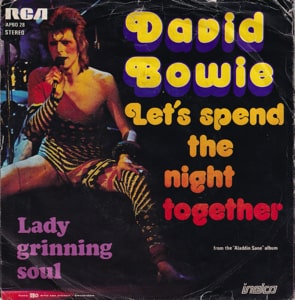 “Let’s Spend the Night Together” is a song written by Mick Jagger and Keith Richards ,David Bowie recorded a glam rock version of “Let’s Spend the Night Together” for his Aladdin Sane album, released in April 1973. It was also issued as a single by RCA Records in the US, Japan, Brazil, New Zealand and Europe including the Netherlands, Italy, France, Greece and Sweden. It was a Dutch Top 40 hit, peaking at number 19.

Bowie’s rendition featured pulsating synthesiser effects. The singer added his own words as part of the finale:

Author Nicholas Pegg describes the recording as “faster and raunchier” than the Stones’ performance with “a fresh, futuristic sheen”,while NME editors Roy Carr and Charles Shaar Murray considered Bowie to have performed “the unprecedented feat of beating the Stones on one of their own songs”, remarking on the track’s “polymorphous perversity” and “furious, coked-up drive”. However, Rolling Stone’s contemporary review found the Bowie version “campy, butch, brittle and unsatisfying”.

Tracklist
side A. Let’s Spend The Night Together 3:10
Written-By – M. Jagger, K. Richard