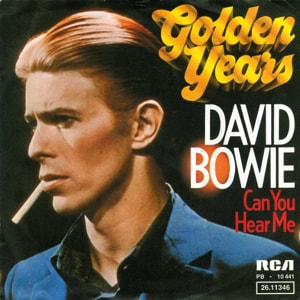 “Golden Years” is a song written and recorded by English singer-songwriter David Bowie. It was released in November 1975 as the lead single of his tenth studio album Station to Station (1976). Co-produced by Bowie and Harry Maslin, it was recorded in September 1975 at Cherokee Studios in Los Angeles. It was the first track completed during the sessions, a period when Bowie’s cocaine addiction was at its peak. At one stage it was slated to be the album’s title track. Musically, “Golden Years” is a funk and disco song that is more reminiscent of the music on his previous album Young Americans than the rest of its parent album. The song was a commercial success, peaking at No. 8 in the UK and No. 10 in the US. The song was played sporadically throughout Bowie’s 1976 Isolar Tour but regularly on the Serious Moonlight, Sound+Vision and Mini Tours.

side B1. Can You Hear Me 5:04
Music/Text: David Bowie
Producer: David Bowie, Tony Visconti