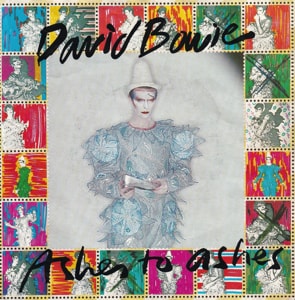 “Ashes to Ashes” is a follow up to “Space Oddity,” and in this song, Major Tom is revealed to be a drug addict.
This song is also about David Bowie’s own experiences with drug addiction. In 1977, David Bowie’s friend and producer Brian Eno brought David Bowie to Berlin to kick his drug addiction. This journey resulted in three seminal David Bowie albums: Low, “Heroes”, and Lodger. They are known as The Berlin Trilogy, also called his “Berlin Period.”.

The lyrics revisit Bowie’s Major Tom character from 1969’s “Space Oddity” in a darker theme, which he referenced once again in 1995 with “Hallo Spaceboy.” The song’s original title was “People Are Turning to Gold.”

Interviewed in 1980, Bowie described the song as “very much a 1980s nursery rhyme. I think 1980s nursery rhymes will have a lot to do with the 1880s/1890s nursery rhymes which are all rather horrid and had little boys with their ears being cut off and stuff like that.” Years later, Bowie said that with “Ashes to Ashes” he was “wrapping up the seventies really” for himself, which “seemed a good enough epitaph for it.”

AllMusic critic Dave Thompson described the track and its accompanying music video as “a very deliberate acknowledgement of the then-burgeoning new romantic scene.”
“Ashes to Ashes”‘ style has been described as art rock and new wave. It is notable for its delicate synthetic string sound, counterpointed by hard-edged funk bass, and its complex vocal layering. Its choir-like textures were created by guitarist Chuck Hammer with four multi-tracked guitar synthesizers, each playing opposing chord inversions; this was underpinned by Bowie’s dead-pan, chanted background voices.

Melancholic and introspective, “Ashes to Ashes” featured Bowie’s reinterpretation of “a guy that’s been in such an early song”, namely Major Tom from his first hit in 1969, “Space Oddity”. Described as “containing more messages per second” than any single released in 1980, the song also included plaintive reflections on the singer’s moral and artistic journey:

I’ve never done good things
I’ve never done bad things
I never did anything out of the blue
Instead of a hippie astronaut who casually slips the bonds of a crass and material world to journey beyond the stars, the song describes Major Tom as a “junkie, strung out in heaven’s high, hitting an all-time low”. This lyric was interpreted as a play on the title of Bowie’s 1977 album Low, which charted his withdrawal inwards following his drug excesses in America a short time before, another reversal of Major Tom’s original withdrawal “outwards” or towards space.

The final lines, “My mother said, to get things done, you’d better not mess with Major Tom”, have been compared to the verse from a nursery rhyme:

My mother said
That I never should
Play with the gypsies in the wood
Bowie himself said in an interview with NME shortly after the single’s release, “It really is an ode to childhood, if you like, a popular nursery rhyme. It’s about space men becoming junkies (laughs).”

Release
“Ashes to Ashes” hit No. 4 in the UK Singles Chart in its first week of release, rising to No. 1 a week later, making it Bowie’s fastest-selling single to that point in time.[9] It was issued in three different sleeves, the first 100,000 copies including one of four sets of stamps, all featuring Bowie in the Pierrot outfit he wore in the video.[11] The B-side, “Move On”, was a track lifted from his previous album, Lodger (1979). The US release had “It’s No Game (No. 1)”. The single peaked at No. 101 in America.

The music video for “Ashes to Ashes” was one of the most iconic of the 1980s. With production costing £250,000 ($500,000), it was at the time the most expensive music video ever made and remains one of the most expensive of all time. It incorporated scenes both in solarised colour and in stark black-and-white and was filmed in multiple locations. The video featured Bowie in the gaudy Pierrot costume that became the dominant visual representation of his Scary Monsters phase. Also appearing were Steve Strange and other members of the London Blitz scene, including Judith Frankland who had designed clothes for Strange’s Visage videos and Darla Jane Gilroy, forerunners of (later participants in) the New Romantic movement that was heavily influenced by Bowie’s music and image. The complexity and high production cost of “Ashes to Ashes” makes it one of the most significant in the evolution of the music video.

Bowie described the shot of himself and the Blitz Kids marching towards the camera in front of a bulldozer as symbolising “oncoming violence”. Although it appears that two of the Blitz Kids bow at intervals, they were actually trying to pull their gowns away from the bulldozer in an effort to avoid them getting caught.[13] Scenes of the singer in a space suit—which suggested a hospital life-support system—and others showing him locked in what appeared to be a padded room, made reference to both Major Tom and to Bowie’s new, rueful interpretation of him. Contrary to popular belief, the elderly woman lecturing Bowie at the end of the clip was not his real mother.

Record Mirror readers voted “Ashes to Ashes” and Bowie’s next single, “Fashion”, the best music videos of 1980. The iconic video was filmed at Pett Level, East Sussex, halfway between Hastings and Rye. A bulldozer is still in action every autumn and winter there, moving shingle about (brought from Rye Harbor) to protect the sea wall defenses.

Alternative versions
There have long been rumours of an extended unreleased version of the song, allegedly some 13 minutes long and featuring additional verses, a longer fade-out and a synthesizer solo. A 12:55 version that appeared on the bootleg From a Phoenix… The Ashes Shall Rise was a fake, repeating the song’s instrumental breaks to achieve its additional length. Similarly, an 11:44 version on bootleg albums such as Glamour, Vampires of the Human Flesh and Monsters to Ashes was again nothing more than the original track with segments repeated and looped.

Live versions
The song has been played on several Bowie tours, including the Serious Moonlight, Sound+Vision, Heathen, and A Reality Tour tours.
A live performance filmed on 12 September 1983 was included on Serious Moonlight (1983 film).

A live recording from a special performance at the BBC Radio Theatre, London, on 27 June 2000 was released on the bonus disc that accompanied the first releases of the Bowie at the Beeb album.